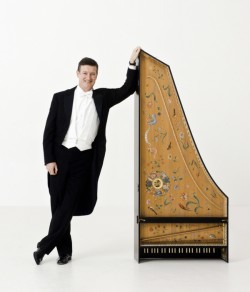 “La Clemenza di Tito,” written just months before Mozart’s death in 1791, is a curiosity among his operas, a throwback to an archaic style he had moved beyond. But what a glorious throwback it is!

In fact, the current revival at the Metropolitan Opera, which opened Friday night, makes a strong case for this “opera seria,” based on a libretto that had already been set to music more than 40 times, as one of the composer’s greatest achievements.

It’s certainly among the strongest offerings from the Met so far this season. The classical antiquity-meets-Age of Enlightenment production by the late Jean-Pierre Ponnelle still looks elegant after nearly 30 years, and, as directed by Peter McClintock, it plays with clarity and vigor. The cast, headlined by the lustrous-voiced Latvian mezzo-soprano Elina Garanca, is consistently top-notch. And baroque specialist Harry Bicket conducts the orchestra in a propulsive, shapely performance.

The story concerns the Roman emperor Titus (”Tito” in Italian) and his predilection for granting clemency to any and all offenders. This generosity is sorely tested when his friend Sesto confesses to having joined an assassination plot, goaded into it by the seductive, conniving Vitellia.

The glory of the opera lies in the way Mozart negotiates within a rigid formal structure, at times using surprising musical undercurrents to breathe dramatic life into the plot and to individualize his three main characters.

Sesto is a “trousers role” written for female voice, and in Garanca it finds a splendid interpreter. She embodies the plight of the anguished young hero with moving restraint, and in her two arias she produces luminous sounds that seem to linger suspended in the air like shining pearls.

As Tito, tenor Giuseppe Filianoti gives a strong portrayal of a righteous ruler grappling with his place in history. His upper register is strained at times, but most of his singing is rich-toned and fluent. Soprano Barbara Frittoli is a marvelously animated Vitellia, imbuing her character with just the right touch of camp. Though she opts for lower alternatives to several high notes, her stylish singing gives consistent pleasure.
Luxury casting of the two supporting female roles makes them almost an embarrassment of riches. In a splendid Met debut, British lyric soprano Lucy Crowe brings bell-like purity to the one aria and one duet allotted to Servilia, Sesto’s sister. And full-throated mezzo Kate Lindsey, in a second “trousers” role as Annio, sounds ready to move up to the part of Sesto. Bass Oren Gradus sings sonorously as Publio, Tito’s adviser.

Five more performances are scheduled through Dec. 10. The matinee on Dec. 1 will be shown live in high definition in movie theaters worldwide.