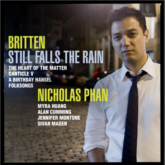 The career of young American tenor Nicholas Phan began to take off three or four seasons ago and, based on this new album featuring the music of Benjamin Britten, he is a talent to watch carefully.

Britten wrote so much music for a specific voice, that of his lifelong partner Peter Pears. It happened to be an unusual voice, which makes Britten’s tenor roles and song settings difficult for just anybody to pick up and sing.

Phan has exactly the right balance of sweetness and power, augmented by a wonderful way with sung English and the shaping of a musical phrase in Still falls the Rain.

(The title comes from an almost unbearably harsh Edith Sitwell poem about bombs falling on London in 1940 but that still speaks to, say, today’s situation in Gaza).

There are two great, substantial pieces on this album:

A Birthday Hansel, written for Elizabeth the Queen Mother’s 75th in 1975, is a multi-layered treat built on seven poems by Robert Burns (hansel is a Scots word for present).

Here, as in a set of eight folksongs, Sivan Magen accompanies gorgeously on the harp (Britten transcribed many of his pieces for harpist Osian Ellis after having open-heart surgery in 1973 that left his right-hand partially paralyzed).

In honour of the coming season, the two last tracks are carols for piano and voice, including Britten’s wonderfully subversive setting of The Holly and the Ivy.

This sleeper release is one of the great solo-vocal albums of the year.