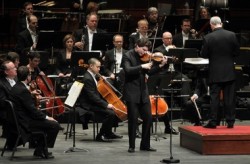 There was only one work on the New Jersey Symphony Orchestra’s program at the New Jersey Performing Arts Center on Saturday that explicitly referenced the Thanksgiving weekend season — Edvard Grieg’s “In Autumn.”

But with a focus on comfortingly traditional fare, full of feeling and sonorities as rich as any pie, guest conductor Hans Graf led a program that was well timed.

Jean Sibelius is often associated with the chilly landscape of his native Finland. But his Violin Concerto possesses a fiery emotional intensity that, combined with its challenge and remarkable, unusual melodies, has made it a repertoire touchstone.

Graf, a regular with the ensemble, led soloist Augustin Hadelich in a poignant and exhilarating performance. With a slender, sugary tone, he savored the pain in the first movement’s sustained chords and climactic leaps upward. (Hadelich’s instrument is the 1723 “Ex-Kiesewetter” Stradivarius.)

In the tearful descending passage that followed — a kind of duet in octaves that gives the impression of the soloist letting go of the all-encompassing passion that had possessed him moments ago — the sound was ethereal.

The orchestra accompanied Hadelich sympathetically from hushed, intimate moments such as the tender, undulating introduction to the rumbling and robust finale. They helped to capture the work’s moody shifts, from a lush embrace of the soloist to a dark foreboding that came on like sudden cloud cover.

Hadelich, a 28-year-old German artist whose list of honors includes the Avery Fisher Grant, displayed impressive range as he conveyed lyricism and mania, gravity and impishness. His musicality served him well as he navigated the unexpected turns and jabbing interruptions of a few quick notes into his sweeping solo song.

The depth of sound in his lower register enhanced the middle movement, particularly in its gentle, wistful recurring fragment of a tune. The composer was once an aspiring violinist and it is tempting to think of this as a reluctant, bittersweet farewell to a dream.

Even when an overly fast cadenza early on became a little wild, it was an engaging display from such a meticulous performer.

Hadelich followed his concerto with a confident performance of Paganini’s Caprice No. 24, gliding over its virtuosic hurdles with finesse.

Graf also led an expressive, if less refined, performance of Brahms’ Symphony No. 3. From its drawn out, portentous opening, the conductor culled a resonant, effusive tone from the orchestra — no shying away from the drama or chivalry inherent even in the mildest of the composer’s symphonies.

There was room for the music to breathe as it grew pastoral and buoyant, with the wind section giving particularly effective performances. Still, there were moments where the definition of the intricate score’s layers and structure could have been finer, particularly in the beginning of the finale, which seemed uncertain in tempo at first.

Grieg’s episodic, bombastic “In Autumn” sounded coarse at times, with a few noticeable flubs. But the musicians were back in good stead with the composer by the end of the concert. As an encore, the orchestra played a crisp rendition of “Anitra’s Dance” from his “Peer Gynt” Suite.