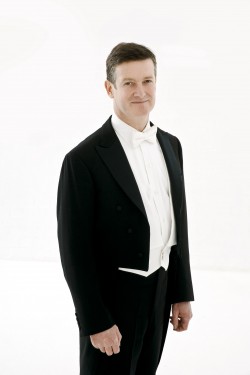 The Ensemble ACJW is known for its range. In January a typical concert featured the music of Bach, Henri Dutilleux, Gyorgy Kurtag and Thomas Adès.

While early music regularly comes up in the group’s programs, it is unusual for it to focus on that. But when the conductor Harry Bicket comes to play, as he did on Sunday evening at Zankel Hall, you do not argue or equivocate.

Mr. Bicket, who is conducting a well-received revival of Mozart’s “Clemenza di Tito” at the Metropolitan Opera, is a rarity among Baroque specialists, able to endow even ordinary orchestras with that elusive early-music snap and swing. “To a remarkable degree,” James R. Oestreich wrote in The New York Times, describing last year’s run of Handel’s “Rodelinda,” “Mr. Bicket has the Met orchestra sounding like a period band.”

He worked the same effect on the Ensemble ACJW, an accomplished group of young professional musicians from the Academy — a fellowship program of Carnegie Hall and the Juilliard School, in partnership with the New York City Department of Education. Throughout a program of Bach, Gluck and Jean-Féry Rebel, the group played with crispness and verve.

But Mr. Bicket does not rely solely on impressively crackling tone. In the first movement of Bach’s Concerto for Oboe, Violin and Continuo in C minor (BWV 1060), there was energy but no exaggeration in his patient shaping of phrases, and he found the lyricism in even the peppiest parts of the overture to Gluck’s “Armide,” part of a suite of arias and instrumental passages from that opera. (The flutist Catherine Gregory had a magically mysterious solo in the “Air Sicilien.”)

The gorgeous second-movement Adagio of the Bach concerto seemed to unspool almost spontaneously, as the soft-toned, eloquent oboist Stuart Breczinski and the focused violinist Michelle Ross traded lines back and forth. The entire ensemble was fearsomely powerful in the remarkable evocation of chaos that opens Rebel’s creation-themed orchestral cycle, “Les Élémens.”

The soloist in Bach’s Cantata No. 51, “Jauchzet Gott in Allen Landen,” and in the arias from “Armide,” was the soprano Lucy Crowe, who made her Met debut in the current run of “Clemenza.” She also recently collaborated with Mr. Bicket on “Il Caro Sassone,” a glittering album of works from Handel’s formative years in Italy on the Harmonia Mundi label.

On Sunday Ms. Crowe was pleasant but vague in the cantata, with a clear, pure voice that tended to thin and tremble as it rose. She blossomed in the excerpts from “Armide,” in which the vivid dramatic situation of an aggrieved sorceress seemed to give her both more focus and more allure.

Tone does not get more melting than hers was on the line “My anger dies away when I approach him.” Mr. Bicket’s accompaniment, here as elsewhere, simmered.