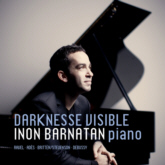 Going to live performances beats sitting at home and listening to recordings any day.

One proof is that while the pianist Inon Barnatan’s most recent album, “Darknesse Visible,” is intelligent and moving, it cannot fully capture the furious flair of his live rendition of “La Valse” by Ravel or the sonic effects of the title work, written in 1992 by Thomas Adès. Mr. Barnatan’s recital on Thursday evening brought the “Darknesse Visible” program to thrilling life.

Mr. Barnatan can do almost anything with tone. He moved in an instant from plush to pearly, giving subtly different colors to the iterations of a repeated note in the “Peter Grimes” Fantasy, Ronald Stevenson’s eerie arrangement of themes from Benjamin Britten’s opera.

But that slight exaggeration was invaluable in Mr. Adès’s work, a drastic elongation of the Dowland song “In Darkness Let Me Dwell.” Mr. Barnatan brought immense anxiety to the quivering that underlies the piece’s glacial calm.

Near the end a muted excerpt from the original Dowland sounds as if it comes from very far away. It was heart wrenching a little while later when Mr. Barnatan evoked that same distant tone in the second-movement Andantino of Schubert’s Sonata in A (D. 959). Though it was not on the album, that great sonata captured perfectly its themes of light and dark.