Back to List
Acclaim
Alexandra Silocea dazzles with the LPO and Jurowski at Congress Theatre, Eastbou
Tweet 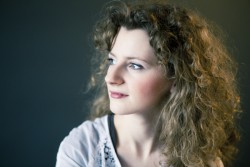 Alexandra Silocea, making her debut with the London Philharmonic, was the soloist in Mozart’s Piano Concerto no. 17 in G major. In recent seasons she has attracted considerable acclaim for a recording of Prokofiev’s sonatas and as a recitalist, all of which mark her as an artist to watch out for. Employing an orchestra of reduced size, the scene was set for a reading of some intimacy. The opening Allegro was introduced by the orchestra cleanly and crisply, aided somewhat by the stage layout that had the strings grouped on the left and winds and horns to stage right. From the start Silocea articulated the piano part with sensitivity that maintained an acutely tasteful sense of tone and scale. Oftentimes, such as in the cadenza, her left-hand touch was particularly notable as it gracefully underlined the melodic material that was imparted with delightful ease by her right hand. The two elements were unified in no small part by good judgement when it came to pedalling.

The transition of mood and feeling was effortlessly accomplished and the Andante second movement took on a sense of the autumnal that also had much in the way of refined introspection about it. The performance as a whole, though, also caught facets of bright bravura and fragility in the dialogue that naturally developed between soloist and oboe, bassoon and flute section leaders. The overall feeling of bonhomie continued into the Allegretto finale. Constructed as a set of five variations upon a march-like theme, an entirely unforced sense of growth and contrast was encouraged by Jurowski, who here allowed strings and winds to hold almost equal sway. Throughout it all, Alexandra Silocea again proved her Mozartian credentials with phrasing of supreme elegance.