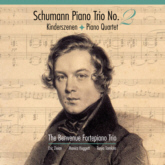 To hear Schumann played on period instruments seems a rare occurrence, but this inscription (rec. 25-29 July 2011) of the 1847 F Major Trio bears listening, especially for the relative clarity of the melodic lines. Schumann meant the F Major Trio as a kind of commemoration of his and Clara’s tenth anniversary of their secret engagement, even quoting from his own song “Intermezzo” from his Liederkreis cycle. The far-away keys of D Major and G Major may represent the circuitous routes love had to take to find connubial bliss. The falling figures of the song even dominate the course of the obsessive slow movement in D-flat Major, Mit innigem Ausdruck, played with inward feeling. The middle section, marked “Lively,” plays the fortepiano (Eric Zivian) against the deep tones of the cello (Tonya Tomkins). The light texture of the instruments makes the Scherzo piquant and elusive at once: in B-flat Minor, the piece indulges in canons that might recall the E-flat Piano Trio of Schubert. The violin (Monica Huggert) plies a wheezy course. The last movement, “Not too quickly,” reaffirms F Major, having pianist Zivian engage in a series knots via his 1841 Franz Rausch instrument. Generally, the melodic gifts Schumann demonstrates in this Trio attest to his initial optimism of expression, as he asserted the F Major makes “a friendlier and more immediate impression” than had his D Minor Trio, Op. 63.

The suite of thirteen pieces Kinderszenen, likely made universally popular via Vladimir Horowitz, Alfred Cortot, and Walter Gieseking, date from 1838 and offer “a recollection of youth for adults.” Originally, Schumann wrote thirty pieces, but he honed the suite down and retained the other selections for his Bunte Blaetter, Op. 99 and the Albumblaetter, Op. 124. The opening motif in five notes from “Of Foreign Lands and Peoples” recurs in various guises throughout the cycle. As rendered by the pianoforte, we glean a degree of soft intimacy the modern Steinway and Baldwin do not furnish, and the ubiquitous “Traumerei” gains some resonant mystique. If some of the forte passages lack solidity in the “period instrument” guise, the legato and lyrical episodes, like Am Kamin, ring with Romantic nostalgia.

The Schumann Piano Quartet in E-flat Major (1842) followed the composer’s three string quartets, a lyrical foil to the more extroverted Piano Quintet. The structure follows somewhat the plan of the C Major Symphony, Op. 61, and like the aforementioned Piano Quintet, employs a contrapuntal finale of more than academic breadth. Adam LaMotte joins the Benvenue Fortepiano Trio at the viola part, although it is the cello part that receives special instructions in the slow movement to tune down his C a tone for added depth of expression. The four beats of the opening Sostenuto nod to Beethoven and look ahead to the Sibelius melody in Finlandia. The taut lightly athletic figures of the Allegro ma non troppo move with fleet brio in this rendition. We might hear in the return of the slow material references to late Beethoven quartets. The Scherzo takes its energies from elfin Mendelssohn, infiltrated by Schumann’s penchant for two trio sections of relative serenity. The Andante cantabile allows cellist Tanya Tomkins here moments (in sevenths) in the sun, with violin Huggest and piano Zivian in close rapport. The model for Schumann’s chromatic excursions seems to be Schubert. The graduated entries of the sizzling Finale: Vivace ripple with rhythmic drive and tonal bite. The form of the movement – after some lyrical interruptions – becomes a plastic hybrid, part sonata-form and rondo, much as Haydn could, dervish-like, balance this equation. Even more of a balance, the scale of this performance manages a robust energy of the concert hall fused to the musing interiority of the salon, quite a sophisticated achievement, I dare say.