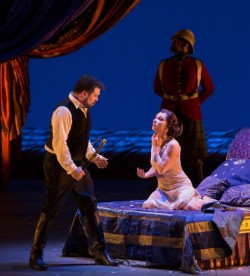 With David McVicar’s spirited take on Giulio Cesare an opulent and vibrant world where British imperialism and raja images represent the Roman conquest of Egypt, New York finally has a stunning production of one of Handel’s most magnificent works. And under the baton of Harry Bicket the musical realization, all four-and-a-half hours of it, is superb.

How to make Handel’s historical opera riveting entertainment, without relying on pink flamingos and cheap visual tricks? McVicar and Bicket, whose production has been seen at Glyndebourne and the Lyric Opera of Chicago, elect to tell the story, by supporting the singers in both stillness and activity. By trusting Handel’s richly varied score, and balancing wit and deep feeling eloquently with visual and aural delights (cute, character-driven sight gags along with some genuinely amusing cadenzas) they get everything right.

Robert Jones’s column-lined perspective set serves as a magic box where jewel-toned draperies, huge military maps, a glistening ocean and an evocative full-moon seascape (Paule Constable’s lighting deserves its own star dressing room) highlight political figures out for revenge and power. Andrew George’s brilliant choreography keeps aria ritornellos clean and engaging, the most memorable musical moments are the slow numbers, and good taste prevails from the entire production team. When the dead characters return for the final chorus, the subtlety of the joke (Handel’s small opera cast always served as its own chorus) is as funny as the discomfort the other characters show, especially Sesto (am I still in character as the shell-shocked boy who finally avenged his father’s murder, or am I a respected British mezzo-soprano appearing at the Metropolitan Opera?). This show is a keeper, and so kaleidoscopically imaginative that repeated viewings are mandatory.

In the title role, David Daniels showed why he is still the world’s premiere countertenor, even with reduced panache in florid passages, and less sonic sheen. Working harder technically seems to have brought even greater focus to his estimable musicianship. High notes and other special effects were well-judged, and his command of this role, the accompanied recitatives and the virtuosic Qual torrente especially, is complete.
As Cleopatra–vixen, schemer, victim and queen—Natalie Dessay sounds fresher and more secure than ever, and McVicar has found a way to channel her kinetic energy into a hilarious and touching portrayal, with no loose ends. Charming and manipulative, Cleopatra is always putting on a show, shuffling through Tu la mia stella sei in flapper costume and parasol, or belly-dancing for Caesar in V’adoro, pupille. Dessay is a knockout in Brigitte Reiffenstuel’s vividly evocative costumes, and happily, the soprano’s technique seems to be on the mend, with clean embellishments and fine top notes. She sold the angular lines and vocal leaps of the poignant Se pietà di me non senti with intensity, and only the bizarre ornamentation of Piangerò marred an otherwise captivating performance.

Alice Coote brought her customary lean and luxuriant vocalism to the role of Sesto, in spite of a Dudley Dursley outfit, while Patricia Bardon’s Cornelia was a model of nobility, once an overwrought Priva son was over. Both Coote and Bardon can spin a long line hypnotically, and the mother-son duet Son nata a consolar worked its magic, tapering to a near whisper as Act One ended.

The score’s high points were delightful—the uncomfortable silences and ritual protocol of Tolomeo and Caesar’s negotiations led to a witty and well-sung Va tacito e nascosto, while the nautical romp of Cleopatra’s culminating Da tempeste found Dessay dancing a hornpipe as blimps and battleships cross the seas.

Moments that often pass indifferently came into focus unexpectedly. Tolomeo’s Empio, sleale draws straight from Rudolf Valentino’s sheik movies, and horror-film lighting enlivens the same character’s Domerò la tua fierezza. Even as soldiers are beating down the door, Cleopatra can’t get Caesar to budge as he sings Al lampo dell’armi, and she is left hanging in mid-air when he raises his sword like a comic-book hero. This is a show whose every element—and there is detail in each moment—comes together for an unforgettable, visionary theatrical event. Let’s hope the Met keeps this production for many years to come.