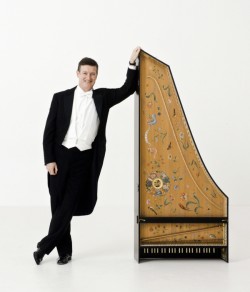 The director David McVicar’s imaginative, daffy and affecting production of Handel’s “Giulio Cesare,” which opened at the Metropolitan Opera House on Thursday night, is new to the company but not to the opera world. It was introduced at the Glyndebourne Festival in England in 2005, has played there and elsewhere since then, and is available on DVD.

Still, give credit to Peter Gelb, the Met’s general manager, for bringing it to New York. It certainly counts as a new Met offering. And it’s a great one. “Giulio Cesare” is a long opera: four and a half hours, with two intermissions. But the members of the opening-night audience rose to their feet after midnight to give an exuberant ovation to the excellent cast, headed by the countertenor David Daniels in the title role and the coloratura soprano Natalie Dessay as Cleopatra, and the excellent conductor Harry Bicket.

In a video interview on the Met’s Web site, Mr. McVicar, who directed the company’s new production of Donizetti’s “Maria Stuarda” this season, gushes with enthusiasm and awe over Handel’s achievement in “Giulio Cesare,” describing the work as a “historical romp” that takes a fictional look at the uneasy alliance between Caesar and Cleopatra. The opera is an audacious blend of serious, comic, romantic and adventurous elements. Mr. McVicar matches that audacity in his production.

He gets inside the issues the opera tackles by likening Caesar and his Roman conquerors to British imperialists of the late 19th century. Just as the Romans viewed the Egyptians as exotic others, the British felt at once superior to, and baffled by, the people and customs of India, the Middle East and the other realms they lorded over. So working with the playful costumes designed by Brigitte Reiffenstuel, Mr. McVicar presents Caesar and his troops as British officers in bright red uniforms, while the Egyptians are arrayed in motley styles: Indian, Moroccan, Asian, Middle Eastern. To these clueless conquerors, all these exotics are alike.

The charming set by Robert Jones, which had to be expanded for the Met stage, is a simple series of receding arches that frame the action. In the distance we see the rippling waters of the Mediterranean, created by an old-fashioned wave machine. Sailing ships, frigates and even dirigibles pass by.

As the story begins, Caesar and his men land in Alexandria. He has put down a rebellion by his rival Pompey and chased him to Egypt, where Cleopatra rules in an uneasy power-sharing arrangement with her ruthless brother, Ptolemy. Thinking he can gain Caesar’s backing, Ptolemy presents the emperor with a gift: the severed head of Pompey. Caesar is shocked.

This creates an opportunity for Cleopatra to win the emperor’s favor and claim the throne for herself. The action follows two story lines: Cleopatra’s attempt to woo Caesar for strategic reasons, only to find herself romantically vulnerable, and the effort of Pompey’s widow and son, the majestic Cornelia and the earnest Sextus, to avenge him.

When we first meet Cleopatra, she mocks her brother in a brilliant aria, “Non disperar,” saying that while he is fated to lose the throne, he at least may find love. The aria is staged like a dance number from a Bollywood movie. Ms. Dessay does a nimbly choreographed routine with two female dancers who mimic each other’s moves, complete with arm thrusts and head swivels matched to the stabbing rhythms in the music. As a young woman, the petite Ms. Dessay studied to be a dancer and actress. She is in her element in these scenes, executing maneuvers with a droll comic look and loose physicality.

Ms. Dessay has had some vocal setbacks in recent years and a shaky run last season as Violetta in the Met’s production of Verdi’s “Traviata.” If she is still not at her best, she is mostly in good voice, tossing off coloratura passagework, singing with sparkle in the perky arias and with melting richness in the sad ones. Now and then she seems distracted by the task of singing. In the great aria of seduction “V’adoro pupille,” Cleopatra, pretending to be Lydia, a noblewoman who has been robbed of her birthright by Ptolemy, tries to enthrall Caesar with a serenade. Ms. Dessay mostly sang with plaintive beauty. But there was some audible effort in her breathing and caution in her delivery.

Overall, though, she gives a valiant and endearing performance. When she first presents herself to Caesar as the wronged “Lydia,” she is dressed as a flapper in mourning, all in black, with sunglasses, yet holding a cocktail for comfort.

Mr. Daniels, who played Caesar at the Met in 2007 for the last run of John Copley’s dull 1988 production of this opera, is again remarkable, singing with his full-bodied sound, emphatic delivery and technical command. He conveys the emperor’s vulnerability when he finds himself bewitched by Cleopatra or touched by the anguish of the suffering Cornelia. But when called for, Mr. Daniels can make fun of himself, as in a spirited aria when Caesar must rush from Cleopatra’s chambers to avoid the advancing forces of Ptolemy. As Mr. Daniels stops to dispatch bravura run after bravura run, Ms. Dessay’s frantic Cleopatra keeps trying to push him out the door to safety.

The whole cast is terrific. The French countertenor Christophe Dumaux steals every scene he is in as the calculating Ptolemy. His voice is bright, clear and strong. Tall, trim and athletic, he is a natural onstage. In one taunting aria, he executes a full body flip as easily as tossing off a trill.

The mezzo-soprano Patricia Bardon brought a plush, warm voice and dignity to Cornelia. The mezzo-soprano Alice Coote is wonderful as Sextus. The character first appears looking like a British schoolboy in a gray suit with knickers. But Ms. Coote, singing with dusky tone and penetrating sound, conveys the challenge this young man faces in trying to avenge his father.

The hearty baritone Guido Loconsolo, in a notable Met debut, is a muscular and menacing Achillas, a general and a power-hungry adviser to Ptolemy. The countertenor Rachid Ben Abdeslam, also in a Met debut, brings vocal sheen and comic antics as the eunuch Nirenus, the confidant of Cleopatra and Ptolemy. And the baritone John Moore is a vocally robust Curius, a Roman tribune in a Scottish kilt. A kilt? Why not? In one scene Cleopatra appears in jodhpurs.

Mr. Bicket draws a lithe, lyrical and stylish performance of this great score from the Met orchestra, reduced in numbers and complemented by a Baroque continuo group. The violinist David Chan, a concertmaster in the orchestra, got into the act. During one of Mr. Daniels’s arias, Mr. Chan traded ornamented phrases with him while bounding about onstage in a costume, a fez on his head. That is the kind of thing a violinist is seldom prepared for at a conservatory.