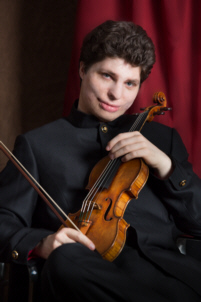 Saturday night, May 25, is your last chance to hear the Utah Symphony on its home stage in Abravanel Hall this season, and there are a couple of reasons you shouldn’t pass up that chance.

First, there’s the soloist, Augustin Hadelich. The German violinist is making his second appearance with the Utah Symphony; two years ago, he gave a sensational performance of Bartók’s Violin Concerto No. 2. This time he’s playing the Dvorák Violin Concerto, and his musicianship on Friday was every bit as stunning. Perhaps even more impressive than his formidable technique were his songful phrasing and vibrant interpretive voice. Conductor Vladimir Kulenovic led the orchestra in a forceful and vividly colored supporting performance.

After a particularly thunderous ovation, Hadelich delivered an even more astounding display of technique in Paganini’s Caprice No. 9. Again, the spirit behind his playing was as memorable as his impeccable articulation.

Kulenovic, the orchestra’s associate conductor, is making his Masterworks Series debut with these concerts. If you aren’t a regular at the young people’s and family-oriented concerts he conducts, it’s well worth checking out this talented conductor. He has an appealing, almost balletic, podium presence. The Utah Symphony followed his direction readily and responsively — which really is no wonder, considering the dozens, if not hundreds, of educational concerts in which the musicians have collaborated with him.

Friday’s concert opened with a pair of Dvorák’s Slavonic Dances. Kulenovic chose the second and third dances from the second set (the composer wrote two sets of eight dances, eight years apart). These two selections are based on dances traditionally performed by old men and younger men, respectively, and Kulenovic skillfully highlighted their distinct characters — stately Old World charm and a sense of spaciousness in the former, jaunty vigor in the latter.

The lively performances of Dvorák made the listener wish that Kulenovic could have presented all 16 of the dances. Instead, the second half of the evening went to Dvorák’s frequent program partner, Brahms. Kulenovic and the orchestra gave a lively and well-paced performance of Brahms’ Symphony No. 2. Playing by woodwind principals Mercedes Smith (flute), Robert Stephenson (oboe), Tad Calcara (clarinet) and Lori Wike (bassoon), along with horn principal Bruce Gifford, was particularly enjoyable.