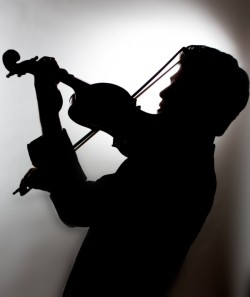 In the last few years, pops concerts and other activities have made the last month of the National Symphony Orchestra's season seem cut short or non-existent. This year, happily, the Kennedy Center Concert Hall has a series of concerts, with some satisfying repertoire, that runs through most of the month of June. The latest one, heard on Friday night, features the return engagement of Czech conductor Jakub Hr?ša, his first since 2010. It opened with Mozart's "Little" G minor symphony (K. 183), not heard from the NSO since 1998, and closed with a rousing performance of Prokofiev's cantata version of his score for the film Alexander Nevsky, a piece associated with former music director Mstislav Rostropovich and last conducted by him in 1993. While that was all well and good, what came in the middle was the astounding violinist Augustin Hadelich, who has distinguished himself time and again as one of the great musicians of our day.

We have reviewed Hadelich in solo recitals (2011, 2009) and playing chamber music with the Musicians from Marlboro, but since we missed his local debut with the Baltimore Symphony Orchestra, this was the first time we have heard him play a concerto, in his NSO debut. Hadelich's technique is nothing short of astounding, so there was little to complain about in the solo part of Dvo?ák's A minor violin concerto, with flawless octaves and other double stops, immaculately tuned, and daring finger-work. Hadelich's tone is intensely refined and clear but not overly large, and Hr?ša, ever careful of balances, did well holding back the orchestra when he needed to do so. The first movement opened with Hadelich trading brilliant cadenza-like moments with the orchestra, with Hr?ša following his soloist's impassioned stretching of the tempo here and there. A pastoral second movement, with Hadelich's sweet solo entwined gorgeously with horns and woodwinds, was followed by a tour de force finale, its joyous theme and furiant-like shifts of meter handled with urbane control by Hr?ša. Appreciative ovations -- but not as overflowing as one might have expected from such a fine performance -- earned an encore of Paganini's 24th caprice. It is one of the most difficult pieces in the solo repertoire, and although I have never heard it played with greater technical perfection, Hadelich's performance left me overcome because of its musicality, that he phrased and caressed the piece so melodically, while making child's play of its virtuosic demands.