Back to List
Acclaim
Britten: Still falls the Rain, The Heart of the matter, Canticle V etc
Tweet 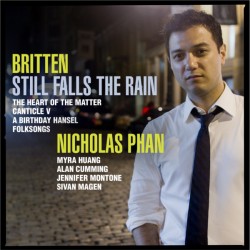 Another well-planned Britten anthology in the composer’s centenary year, made more interesting by its choice of performers – none British, apart from an unexpected, eloquent spoken cameo from Alan Cumming in The Heart of the Matter. Heard here in Peter Pears’ abbreviated version, the song sequence has at its centre Britten’s Canticle III, surrounded by additional Edith Sitwell settings and readings and framed by a haunting prologue and epilogue. Still falls the Rain is compelling, Sitwell’s unsettling response to the London Blitz matched by Britten’s uncompromising music. Seconds before the close, tenor Nicholas Phan duets with Jennifer Montone’s rich-toned horn obbligato to sublime effect. It’s a glorious moment. Cumming’s readings are effective, only suffering slightly from having been recorded in an audibly different acoustic.
Britten was no longer able to perform as a pianist in his final years, composing several of his last vocal works for the harpist Osian Ellis to play along with Pears. Including the effective, spare final canticle, The Death of Saint Narcissus. There’s A Birthday Hansel, a compact sequence of Burns settings for tenor and harp written for the Queen Mother’s 75th birthday, with an elaborate harp part slightly at odds with the baldness of Burns’ verses. More successful are Britten’s final spare, folk song settings, their accompaniments better matched to the texts. Nicholas Phan’s expressive voice is a draw, as is Myra Huang’s pianism in the main work. Nice horn and harp too.