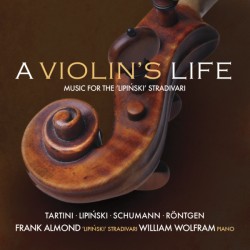 In a Kickstarter-funded recital of music "built from double-stopped chords," as British violin expert John Dilworth puts it in his gripping liner notes, Milwaukee Symphony Orchestra concertmaster Frank Almond and concert piansit William Wolfram trace the history of the storied "Lipinski" Strad, named after Paganini's great Polish rival, and the composers and violinists who once possessed it.

Almond plays the instrument, which its anonymous owner has loaned to the symphony.

Composer and pedagogue Giuseppe Tartini, who may have commissioned the Lipinski violin and taken delivery from Stradvari himself in 1715, contributes his inconic "Devil's Trill" Sonata; there is also Lipinski's nightmarish Op. 29/3 Caprice; Robert Schmann's Second Violin Sonata (compsoed with Lipinski in mind); and a little sonata of other-worldly late Romantic beauty by Julius Rontgen (who owned the instrument at one time). In each, Almond plays as if his fiddle's life was on the line - in his hands, the Lipinski flourishes and shines in notes spun out with casual virtuosity and graceful poetry. The simplicity with which he sings the Schumann slow movement is especially fine.

While the challenge to Almond was to bring forth everything the Lipinski and the composers had to say, the challenge for the Avie label was to capture the sound and the emotion.

They have done so with a recording, made at the Youth Arts Centre in Milwaukee, that is balanced exactly right and that sounds beautiful on any system - on an audiophile system, the sense of space is remarkable.

"It's an honor and privilege to be passing through the Lipinski's life," writes Almond in the booklet.

With this release he has paid back his debt in no small way.