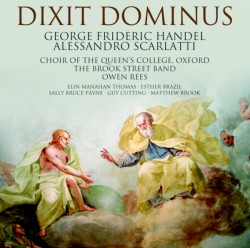 It is quite surprising that the program here, pairing settings of the Dixit Dominus by Handel andAlessandro Scarlatti, is unique or at least very rare, for these two works were strongly connected.Handel's Dixit Dominus, HWV 232, was completed in 1707, while the young composer was spreading his wings in Rome. Scarlatti's setting exists in a copy dated 1716, but it may have been written beforeHandel's. At any rate, there are parallelisms of structure, and the supposition that Handel was trying to knock off the established cock of the walk with his grandiose setting is not far-fetched. The Handel Dixit Dominus is one of the masterpieces of the composer's early years, perhaps the first work to show his characteristic way of building up a large structure from the most minimal of tonal resources, and it receives an absolutely superb performance here from the Brook Street Band and the Choir of Queen's College, Oxford. The choir represents the British university choral sound at its best, with a pleasantly smooth texture and clear renderings of the contrapuntal movements. The historical-instrument Brook Street Band, with just a dozen members, does justice to the dimensions of Handel's work. But the real treat here is the youthful set of soloists. Sample the massive Dominus a dextris tuis movement ofHandel's work (track 17). Where Scarlatti contents himself with a simple bass solo, Handel constructs a contrapuntal edifice involving all five of them, plus the choir, and all the singers emerge as real individuals joining forces. The antiphonal contrast between the two sopranos at the beginning is a real thrill, and the music-making only deepens from there. The Scarlatti work is full of opera-like arias that also display these soloists to best advantage. You're hearing the Baroque stars of tomorrow here, and everything about this album represents British Baroque performance at its best.