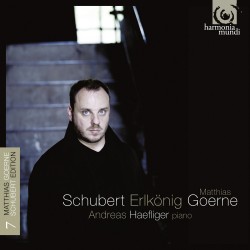 In this Schubert recital, Matthias Goerne and Andreas Haefliger achieve an air of contemplation so sustained that one is aware less of individual lieder than of a disc-long voyage of exploration. The sequence of songs even suggests an abstract scenario. In many of them, the singer is a traveler, pondering the natural world and finding its echo in his soul. The theme is set in the first selection, "Im Abendrot," in which he surveys a landscape in twilight and makes a conscious decision to embrace its beauty. The journey proper begins with the next song, "Der Wanderer," which sends him traveling down a mountaintop, scanning the forbidding terrain below. From there he moves steadily toward the aquatic realms of "Die Forelle" and "Fischerweise." Some of the selections are less explicitly nature-bound, but even there the context invites us to hear the natural elements they describe — for instance, "Erlkönig" itself, full of the "Nacht und Wind" invoked in its opening line.

The probing interpretations on this disc serve to strengthen the connections between its individual numbers. In a 1996 Decca recording, Goerne and Haeflinger perform "An den Mond" (D. 259) at a serene, steady tread. The reading suggests that even if the singer has renounced joy, he has found calm contentment. On the current disc, though, the musicians take the number more slowly, and with a much more generous application of rubato, as if investigating the realm "between joy and sorrow" that the song suggests. That sense of digging deep into emotionally ambivalent territory pervades the recital. Even the jaunty "Fischerweise" casts melancholy shadows, as if good spirits could only be defined in contrast to their opposite.

Berlin's Teldex Studio, where the recording took place, is here made to sound like the most intimate of spaces. Goerne's singing is sometimes so quiet that one wonders whether it would carry in even a medium-sized recital hall. The scale allows the performers to make their effects delicately. Nothing is made emphatic, and nothing is allowed to impede the flow of pure melody. But the performers' quiet intensity serves to draw us in closer — to compel us to stay by their side as they lead us through the recital's spiritual journey.

Taken individually, these are exemplary interpretations. Singer and pianist have obviously worked closely to illuminate each selection. Their attention to detail is especially apparent in strophic songs, such as the yearning "Alinde" or "An den Mond." One is hardly aware of repetition; instead, there is the impression of a musical argument pressing forward. Goerne's technique is impeccable — just listen to the arpeggiated turns in "Fischerweise" — and his voice remains an uncommonly handsome instrument. Since that earlier recording, a trace of falsetto may have introduced itself into his top notes, but the lower part of his range has acquired a new, bass-like richness. The beauty of the singing makes it a pleasure to join Goerne and Haefliger on their journey. But it is the voyage itself that makes this such a deeply rewarding disc.