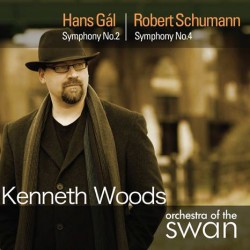 “It is, I dare to assert, the most important Adagio since Bruckner”: such was the verdict of musicologist and biographer Wilhelm Waldstein on the slow movement of Hans Gál’s Symphony no. 2 in F, Op. 52, forged during one of the darkest periods of the Second World Ward, and of its composer’s troubled life. Upon hearing the complete work today, one appreciates that its remaining three movements are of similar quality and interest, and this deeply personal and touching symphony can now be evaluated in the second new account to be released within the space of three years on the Avie label.

The world premiere recording of the work (paired with Schubert’s “Great” C major Symphony) by the Northern Sinfonia under Thomas Zehetmair was made at the orchestra’s home base, Hall One, at the Sage, Gateshead in September 2010. It is now joined by this newcomer from the Stratford-upon-Avon-based Orchestra of the Swan conducted by Kenneth Woods, where the coupling is Schumann’s Symphony No. 4.

Though Zehetmair and the Northern Sinfonia play the work skilfully enough, there is about Woods’s traversal a ringing personal conviction about the merits of this score which lends a defining urgency and authority to his performance. Densely scored, yet pervaded by a conservatism strongly rooted in the pre-Second Viennese sound-worlds of Brahms and Bruckner (and shot through at times with an English pastoral quality suggestive of Vaughan Williams), this music is never difficult to enjoy.

As the composer’s own programme note states, the emotional axis of the symphony is its Adagio, placed third and lasting over 15 minutes. “It acts,” wrote Gál, “as a ‘drama of the world’ (Weltspiel) between the two parts of a mediation which is turned completely inwards. The actual conflict and its working out is left to the last movement, which, starting out from a passacaglia-like episode, develops into an extended sonata form and, in an ever more calming coda, spins itself again in to the withdrawn mood of the introduction, turned away from the world.” The other-worldliness of the music, however, is anything but Mahlerian in character, eschewing self-regarding angst, and it is the final two movements of the work which produce an undeniably eloquent effect.

Under Woods, the Orchestra of the Swan plays with magnetic conviction and unwavering technical assurance. There’s an ardour and resolve here which leaves the listener in no doubt that these musicians and their conductor believe in the worth of every bar of this music and it would be hard not to remain gripped throughout this traversal. Plangent string textures and solo wind contributions of character and distinction show just how far the Orchestra of the Swan has progressed during the relatively short period of its existence and it plays with more involvement, commitment and individuality than some of its better known rivals. That includes the Northern Sinfonia under Zehetmair, whose more dutiful approach suggests that neither conductor nor players have much faith in the music. Beside the sharp-edged and ever-insightful conducting of Woods, who brings Gál’s music fully to life with unfailing vividness and lucidity, Avie’s premiere recording doesn’t quite live up to expectations.

“If the Third Symphony represents Schumann’s closest approach to symphonic monumentality,” observed Gál (how many of us gained wider appreciation of Schumann’s orchestral music through the medium of Gál’s excellent little book in the sadly long-forgotten BBC Music Guides series? I still have it on my bookshelves, along with Gál’s The Golden Age of Vienna and Franz Schubert and the Essence of Melody), “the Fourth Symphony is his most ingenious experiment in form.” Certainly in the capable hands of Woods and his Stratford team, Schumann’s D minor Symphony makes a stimulating foil to the Gál work. While this account, freshly minted and invigorating as it is, doesn’t displace the likes of Karajan’s version from his famous 1972 cycle (DG) or Szell’s classic Cleveland Orchestra recording (Sony), there is still plenty to admire and enjoy here.

With a warm and natural recording (Avie’s engineering in Gateshead tended towards upper-register shrillness) from Stratford-upon-Avon’s Civic Hall, and informative and persuasive notes by Woods himself, this adventurous release can be unreservedly recommended.