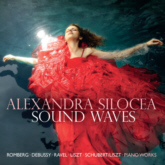 For her second Avie disc, pianist Alexandra Silocea selects a world of water colors and poetry, most of which, but not all, offering spiritual solace.

This second disc – after an all-Prokofiev album – for Avie by Romanian pianist Alexandra Silocea (rec. 19-22 September 2012) has as its rubric “a journey through colors, shapes, textures, where there is room for mystery, where one can take a step back and wander through the imagination.” Silocea wants to test her Steinway D’s capacity to make variegated and exotic colors: sea, shades of light, sun, and love of life.

Silocea opens with a contemporary piece by Martin Romberg (b. 1978), Earendil, whose name means “Lover of the Sea” in the language of Quenya, from the Tolkien ethos of The Silmarillion. Earendil was the first mortal man to cross the sea that separates Middle-earth from the gods’ abode of Valinor. His ship Vingilote traverses both sea and air, long before James Bond but much in the spirit of the Yeats hero Cuchulain. Romberg’s glittery musical syntax begs to be compared to Ravel’s “Ondine” from Gaspard de la Nuit, with its own roulades and cascading scales in modal harmony.

More familiar are the selections for her Debussy group: opening with Debussy’s vision of the “happy isle” of Cythera, his 1904 A Minor (in the Lydian mode) “toccata” L’sle Joyeuse. Silocea relishes its exotic use of whole-tone scales in staccatos and sudden eruptions of block chords, a kind of Delphic dance that moves through “accidental” D-sharps until it reaches an orgiastic A Major. Debussy’s first piece from his 1905 Images, “Reflets dans l’eau,” revels in shifting water colors and modal harmony, hazy tints of oils on canvas. The resounding D-flats and E-flats assume a carillon quality after several repetitions, and Silocea’s bass chords resonate most suggestively. The most “Lisztian” piece, Poissons d’or (from Images, II, 1907), means to capture a lacquer still-life suddenly freed of its static medium so that its original motor-source dominates. Silocea’s independent hands conjure a slick array of colors in impish and mercurial hues.

Ravel’s own homage to Liszt ensues, his 1901 Jeux d’eau, a musical portrait of a Versailles fountain. Facile motion marks Silocea’s way with its rivulets and sprays undergirded by a kind of music-box chorale. If a river god does reveal himself through these fluid motions, he likely has had more than agua pura to imbibe. Silocea’s tonal palette proves particularly effective in this diaphanous rendition.

Liszt himself takes center stage with his most influential water-piece, the brilliant 1877 Les Jeux d’eaux a la Villa d’Este, which pianists from Arrau to Cziffra have found a ripe vehicle for their respective virtuosity. Silocea applies a luminous patina to this ecstatic water-piece, obviously intending to illuminate its inscription from the Book of John, to the effect that these waters promise eternal life. Tender and infinitely, rhetorically erotic, the measures transcend mere decoration and achieve a devotional simplicity which never fails to transfix us when rendered masterfully. Suffering and redemption set the discursive tone for Liszt’s 1862 Variations on Bach’s Weinen, Klagen, Sorgen, Zagen from the so-called Jubilate Sunday Cantata No. 12. “Your sorrow shall be turned into Joy,” admonishes John (16:20). That the piece adumbrates Cesar Franck in several respects comes as no news. The effective use of the original bass line in semitones, the Schmerzenbass, exploits the idea of Jesus’ stages of suffering in an inevitable progress toward salvation, a journey to which each devout Christian commits himself to undergo. The writing for the keyboard becomes heavy and thick, the textures bordering on the contrapuntal molasses we associate with Busoni. The last two minutes clear the air with a simple declaration of faith: “What God does, that is well done.” Whether all of Silcocea’s triple –fortes are warranted is a matter for the purists.

For her two final Liszt-proper works, Silocea explores two contrasting sensibilities: first the Nuages gris of 1881, an “experimental” piece in perverse Lydian harmony on G. Much of Expressionism asserts itself in this disturbing miniature, whose pictorial equivalent might be found in the nervous paintings of Egon Schiele. Whatever colors Silocea means to preserve in this piece, they do not offer consolation. Orage (1854) derives from Liszt’s book of Swiss travels, a depiction of a thunderstorm in the manner of Beethoven, Berlioz, Byron, and Shelley. Mountains of octaves flow forth from Silocea: passionate, wild, and eminently intended to display potent bravura. The printed inscription from Byron’s Childe Harold Silocea takes as a challenge to rival Nature’s tempests with those of the human heart. Silocea enjoys the big technique, and her grasp of the work, much in the style of a transcendental etude, reminds us of the past masters of this piece, Cziffra, Berman, and Arrau.

Schubert’s “The Miller and the Brook” from Die Schoene Muellerin in Liszt’s transcription concludes this colorful hour of keyboard prowess. The sostenuto pedal provides the sensuous resonance for the poet’s musings, the rippling stream’s lyric song eventually becoming an emotional torrent rife with thirty-second notes. “When love conquers pain, a new star, a little one, shines in heaven.” So saith the poet.