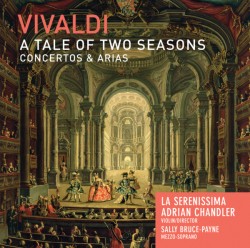 The premise of this release, the latest of Chandelr's exploration of Vivaldi's world, is the juxtaposition of music from two different years - 1717, when he wrote the operas Arsidla and L'incoronazione di Dario and 1733, when Motezuma was produced. Both soloists are outstanding - I have previously only heard Sally Bruce-Payne singing German church music, so it was a delight to hear her in more overtly dramatic repertoire - a full voice like the Maria Christina Kiehr in Robert King's Juditha triumphans, with control of the runs over the entirety of her range, and a wide palette of sounds that she uses to the full, and an agility in the runs (and the decorated repeats) that is most impressive. Adrian Chandler, of course, shines in his three concerti, but he has also done a marvellous job with La Serenissima, who speak with one voice - there can be very few groups to rival the passion of their performances and innovative ingenuity of programming. Bravo!