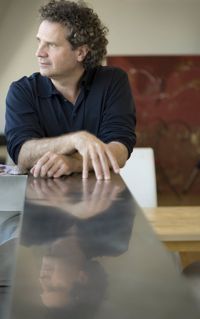 A wonderful recital, both in terms of programming and performance! No dubious attempts at ‘light relief’, but an exploration of German song that ranged beyond familiar ‘favourites’ without compromising upon quality. Matthias Goerne was in his element here, well supported – and rather more than supported – by Andreas Haefliger.

It was, of course, Haefliger who had the opening word, the introductory harmonies of Neue Liebe, as so often with Wolf, clearly in a line of descent from Wagner and Liszt, without being reducible to those influences, chords from the sepulchre, beautifully voiced, reminiscent from afar of Liszt’s ‘Il penseroso’ from the Italian Années de pèlerinage. The following Peregrina songs, again Mörike settings, offered an interesting case study of how songs that are famously focused upon text can yet emerge as less word-dominated than one might have expected, a consequence both of a fine pianist and a truly collaborative singer. Peregrina II almost sounded at times as if shading into melodrama (in the proper sense), yet somehow melodrama with an exquisite vocal line, Goerne’s crescendo and diminuendo on the last two lines a perfect example of synergy between words and music. The sole Liszt song in the first half, Blume und Duft, emerged as properly Tristan-esque, and for once – an exaggeration, I know, though a pardonable exaggeration – it may have been a matter of Wagnerian influence upon Liszt rather than the other way round, this Hebbel setting having been written in 1860, just after Tristan. In this performance, it was not just the harmony, tonality verging at times upon the suspended, but the vocal line and delivery that shaded into such dangerous territory. I could not help but think what a splendid Kurwenal Goerne would be likely to make in the future – until I consulted his programme biography, to discover that he has already sung the role.

Wolf and Mörike returned in the guise of An die Geliebte, whose poetic and musico-dramatic contours were finely drawn by both artists. The quiet ecstasy with which the song concluded could hardly have been bettered. Nachtgruß would soon offer a similar but different form of magic, that of the night, which, in Goerne’s hands, or rather through his voice, left us spellbound. The three Michelangelo-Lieder showed once again a composer in the wake of Wagner and Liszt, nevertheless unmistakeably himself. ‘Alles endet, was entstehet’ almost made Wotan’s Walküre monologue seem like a jeu d’esprit: profound in the best sense, like Goerne’s baritone itself. The final ‘Fühlt meine Seele’ offered again a sensibility that was definitely post-Lisztian, post-Tristan, and yet crucially remained very much of the Lied rather than the opera house or indeed the ‘star’ recital.

Liszt remains overlooked, even condescended to, by many who should know better. How people can talk such rubbish about him if they were to hear songs such as these, in performances such as these, I really do not know; perhaps we simply have to accept that the problem lies not with the composer and continue without the not-so-cultured despisers. Ein Fichtenbaum steht einsam offered an immediate audition for the Romantic Liszt, especially in the piano: such characteristic figures and harmonies, the Années de pèlerinage again brought to mind, and such flexibility of delivery from both performers. Goerne’s strength of tone in Vergiftet sind meine Lieder, also a Heine setting, and his identification with the text were second to none. Ardour with an undertow of sadness marked the impeccable musical flow of Laßt much ruhen, but it was the relatively early (c. 1845) Georg Herwegh setting, Ich möchte hingehn that seemed to mark the very heart of the recital – or at least a twin heart, with the Michelangelo settings. Tristan-suffused, albeit this time very much avant la lettre, Liszt’s writing and sensibility seem all the more telling, given that it would be Herwegh who would introduce Wagner in his Zurich exile to the philosophy of Schopenhauer. Here, we were led into the world of a somewhat, though only somewhat, more German complement to Liszt’s own Petrarch sonnet settings. Haefliger’s shading and phrasing proved just as impressive as that of his colleague. Wotan again came to mind in the late (1880) Des Tages laute Stimmen schweigen, Goerne’s audibility and communication at pianissimo, indeed later at ppp, quite breathtaking. The ghostly expressionism of the final kiss, ‘Dann kusst euch still und mild die Nacht’, was judged to unexaggerated perfection.

Haefliger relished, likewise without unnecessary underlining, the proto-Parsifal progressions of Über allen Gipfeln ist Ruh’, before we returned to Wolf, whilst remaining with Goethe, for the three Harfenspieler: the piano’s assumption of the harpist’s role delightful in the first, the syncopation of the second especially unsettling. Remaining with Goethe a little longer, Liszt’s Der du von dem Himmel bist offered something akin to a depressive Liebestraum. Wolf’s two Byron settings from 1896 followed, ‘Keine gleicht von allen Schönen’ sinuous, weighty, and undeniably heartfelt. Morgenstimmung proved the recital’s crowning glory: quite the climax in every respect, both unifying and true culmination.