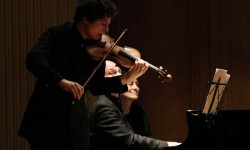 The Frick Collection’s Music Room, which seats just 175, is an ideally intimate space for chamber music. This is especially so when the performers are as excellent as the brilliant young German violinist Augustin Hadelich and the fine British pianist Charles Owen, who played a memorable recital there on Sunday afternoon, a highlight of the Frick’s valued concert series, now in its 75th-anniversary season.

At 29, Mr. Hadelich, who lives in New York, has won acclaim for appearances with major orchestras and is especially devoted to chamber music. This program also revealed him as adventurous in his choice of repertory.

To glance at the printed program, you might have thought the program a motley collection of pieces. There were sonatas by Beethoven, Schumann and Janacek, along with a solo violin sonata by Eugène Ysaye, and works by two living composers, both born in the 1920s, who seemed an unlikely pairing: the Hungarian modernist Gyorgy Kurtag and the ubiquitous André Previn.

There may have been no discernible theme or stylistic thread running through the program. But surprising musical resonances, contrasts and connections between these works came through vividly. From the opening movement of the first piece, Beethoven’s Sonata No. 1 in D, the level of playing was superb. Mr. Hadelich’s combination of rich-toned elegance and impish spontaneity was wonderful. The rippling clarity of Mr. Owen’s playing brought consistent delight.

It was an inspired idea to follow the Beethoven with music from seemingly another realm: Mr. Kurtag’s “Tre Pezzi”for violin and piano, composed in 1979. The first piece is mysterious, almost aphoristic, just tentative piano chords and a quizzical violin line. In the last piece, the violin seemed to be playing some scratchy-toned, ancient folk song atop cosmic piano chords.

The performers segued without break into Schumann’s Sonata No. 1 in A minor. And even though the Schumann begins with a rhapsodic theme for violin over a piano part of agitated runs and arpeggios, the inner strangeness of the music seemed more apparent because Mr. Kurtag’s fantastical work was still in your ears.

After intermission, Mr. Hadelich played Ysaye’s one-movement Sonata No. 6 in E, composed in 1924. These solo sonatas by Ysaye, the astonishing Belgian virtuoso violinist (1858-1931), are often dismissed as show-off pieces. While dispatching the technical challenges easily, Mr. Hadelich revealed the musical ingenuity of a work that evolves in daringly disjointed phrases and obsessive sequences, until toward the end there is a hint of a dance.

Next came Janacek’s searching, strangely beautiful Violin Sonata, in a gripping performance. In the first movement, this duo teased out what seemed some hearty Czech folk dance trying to break free of ominous tremolos in the piano and haunting stirrings in the violin.

Finally, the dance element came center stage with Mr. Previn’s “Tango, Song and Dance,” composed in 1997. For an encore, Mr. Hadelich and Mr. Owen kept the choreographic character of the program going with a spirited, fresh account of Bartok’s Six Romanian Folk Dances.