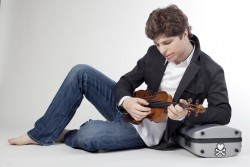 The Atlanta Symphony Orchestra’s classical subscription concert on Thursday evening featured music by Schubert, Paganini and Elgar, led by guest conductor James Feddeck and guest violin soloist Augustin Hadelich. Tonight’s early evening performance at Symphony Hall will be one of the truncated “First Friday” shows at 6:30 p.m., with only the Paganini and Elgar on the docket. The final, full-menu performance will take place again at Symphony Hall on Saturday evening at 7:30 p.m. Ah, but Thursday had a special element not to be repeated this week: 45 minutes before the concert, the ASO hosted one of the wonderful preconcert chamber music soirées that allows audience onstage for a truly up-close and personal experience. This time, it was Schubert’s “Trout” Quintet, with a twist. ASO violinist Justin Bruns, violist Reid Harris, cellist Christopher Rex, bassist Gloria Jones and pianist Peter Marshall performed the entire piece. They also inserted the composer’s song “The Trout (Die Forelle),” which was well sung by tenor Richard Clement, just before the penultimate theme-and-variations movement based upon that tune. The performance, dedicated to the late ASO principal bassist Ralph Jones, was a compelling rendition of the familiar music with some especially sparkling piano work from Marshall within the tightly knit ensemble. It was a really good choice as a setup for the first work on the orchestral program proper, Schubert’s Symphony No. 3, written when the composer was 18. There are both “classical” and “romantic” aspects to Schubert’s music, and Feddeck — who completed a four-year stint as assistant conductor at the Cleveland Orchestra at the end of last season – inclined toward the former during the first three movements. In these, the orchestra was light on its feet, powerful enough without being heavy and with good lyrical phrasing. Then the tarantella-like concluding Presto picked up on more of Schubert’s romantic side, the natural bent of its flurried pace of harmonic and dynamic contrasts. Hadelich took the stage to perform Paganini’s Violin Concerto No. 1 in D major, which proved the apex of the evening. The German-born violinist’s personal story is an amazing account of overcoming tragedy. In 1999, when he was 15 years old, his upper body was severely burned in a fiery accident on his family’s farm in Italy. He was told by doctors that he would likely never play again. But after almost a year, he began practicing and returned to performing in 2001. From his performance of the Paganini on Thursday, one might have thought that story apocryphal. Hadelich stole the show with an astounding array of technical capabilities and dead-on-target intonation in a work that is rife with both technical demands and great opportunities for the soloist to make the violin sing. For example, where many soloist might toss off passages of bouncy ricochet bowing just to get through them in one piece, Hadelich’s ricochets were amazingly controlled and “real” — perhaps a detail felt more than consciously noticed by many audience members. But it was certainly something to make a fellow violinist or violin aficionado think, “Wow! Is there anything this guy can’t do?” And when it came time for him to make the instrument sing, sing it did. That “anything” reached beyond to Hadelich’s compositional skills, as the cadenza in the first movement was Hadelich’s own, true to Paganini’s style and incorporating elements from the orchestral passages that you don’t usually hear in a cadenza for this concerto. After multiple ovations, with shouts of “Bravo!” scattered across the audience, Hadelich played a contrasting encore: the “Andante” from Bach’s solo Violin Sonata No. 2. It was an unhesitating performance, well voiced, direct and not labored by curious interpretive assumptions. After intermission, Elgar’s “Enigma Variations” were given a fine performance by the orchestra, even if not a particularly distinguished approach under Feddeck’s baton. The half-hour work is, however, a solid and substantive crowd-pleaser. After having been roused to heights of enthusiasm by Hadelich’s performance in the first half, how could an audience not be happy with good, if mainline, Elgar? If for no other reason than Hadelich’s performance of the Paganini, it’s a “go to” concert that, alas, drew a smaller crowd on Thursday night than it ought to have. Saturday is a good opportunity for Atlantans to rectify that shortcoming.