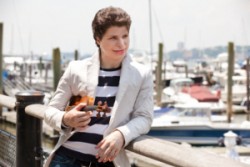 M stands for March, Mahler, Mendelssohn, musicians and even maestro Alexander Mickelthwate. All of the above were on the bill Friday night when the Winnipeg Symphony Orchestra performed its latest concert of its — you guessed — Masterworks series.

The program led by Mickelthwate featured dynamo German violinist Augustin Hadelich performing Mendelssohn's Violin Concerto in E minor, Op. 64, one of the cornerstones in the violin repertoire fondly dubbed the "heart's jewel." But make no mistake, the three-movement work is no sentimental walk in the park; instead, its three relentlessly driving movements teem with nail-biting technical feats that could easily topple lesser artists.

Fortunately, we were in very good hands with the German soloist, 29, who has transcended his own daunting life challenges, including a catastrophic fire as a young teen that nearly destroyed his fledgling career. The virtuoso musician -- having successfully recovered -- now maintains an active concert career, with recent dates including the Buffalo Philharmonic, Dallas Symphony, Los Angeles Chamber Orchestra, among others.

The second movement Andante displayed his lighter, sweet tone, with the fully engaged violinist joining the orchestra as though in thoughtful, contemplative dialogue. He instilled such playfulness in the finale Allegretto non troppo, merrily tossing off runs on a single up-bow, you could not help but feel his pure joy at music-making.

After receiving a spontaneous standing ovation, the charismatic player treated us to an encore: Paganini's Caprice No. 5, that elicited an audible "wow" from a suitably impressed audience member. Even the orchestra applauded -- especially the equally impressed violin section.