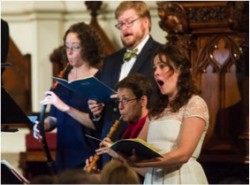 Tenet and the Sebastians: From left, Priscilla Herreid, Geoffrey Williams, Debra Nagy and Molly Quinn during these ensembles' performance at Holy Trinity Lutheran Church on the Upper West Side.
Ian Douglas for The New York Times

The early-music vocal ensemble Tenet opened its season on Saturday evening at the Holy Trinity Lutheran Church with resplendent performances of four Bach motets, conducted by Scott Metcalfe. The group has sung this richly virtuosic choral music in the past, but here, following a practice that scholars believe Bach employed, it joined forces with the period-instrument ensemble the Sebastians, with each instrumentalist doubling one vocal line. A soprano might be twinned with a violin, for instance; a baritone with a bassoon. Some of the tenor parts, with their difficult-to-match range, were doubled by an oboe da caccia, the scimitar-shaped “hunting oboe” of Bach’s time, with its distinct, throaty sound.

The result in the intricate contrapuntal passages resembled a tapestry in which each strand was shot through with fine metallic thread: Colors gleamed and sparkled; the pattern of the weave stood out vividly. The visualization of the music was further underscored by the spatial arrangement, with the players spread out among the singers.

While the instrumental doubling adds color and zest, it also tends to obscure the text. The words came through most clearly during the more musically homogeneous chorales at the close of a motet, such as “Der Geist hilft unser Schwachheit auf” or “Komm, Jesu, komm.” At other times, the words — so important to Bach and so lovingly set — were nearly reduced to the clicks and hisses of consonants.

And yet there was no doubt that the spirit of these devotional, faith-affirming works was well served in this arrangement. This was especially true in “Singet dem Herrn ein neues Lied,” a motet set to psalms that exalt singing itself as an act of worship. Here, the amplified multiplicity of voices, joined in a common purpose yet each maintaining its unique character, movingly expressed the sense of agency and responsibility of the individual that was so central to Bach’s Lutheran belief.

The motets were interspersed with the Sebastians’ buoyant performances of two instrumental works: Telemann’s “Ouverture à 7 in C” for three oboes and strings and Handel’s Trio Sonata in G (Op. 5, No. 4). Light and lean, they functioned like palate cleansers in between