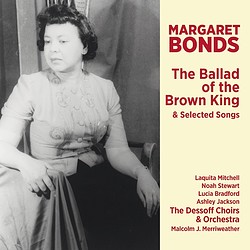 On November 1, 2019, New York City-based The Dessoff Choirs and their conductor Malcolm J. Merriweather will release the world-premiere recording of The Ballad of the Brown King by African-American composer Margaret Bonds. Considered Bonds’ crowning achievement, the libretto for this Christmas cantata was written expressly by her friend, the poet Langston Hughes. The recording, the ensemble’s first for AVIE Records, unites The Dessoff Choirs with full orchestra and features a first-class line-up of soloists – soprano Laquita Mitchell, mezzo-soprano Lucia Bradford, tenor Noah Stewart, and Bonds authority Dr. Ashley Jackson on harp. Rounding out the album is a selection of specially arranged songs by Margaret Bonds, featuring baritone Malcolm J. Merriweather with harpist Ashley Jackson.

Margaret Bonds (1913 – 1972), a native of Chicago, grew up in a cultural household that hosted some of the leading artists and activists of the mid-20th century, including composer Florence Price. She studied music at Northwestern University – where she experienced abject racism – and made her debut with the Chicago Symphony Orchestra in 1933, the first African-American pianist to appear as soloist with the renowned ensemble. In the mid-1930s she encountered poet Langston Hughes for the first time; their sibling-like chemistry led to a close and lasting friendship.

Bonds moved to New York City in 1939, and her kinship with Hughes – who had made the metropolis his home – grew even deeper. His libretto for The Ballad of the Brown King focuses on the dark-skinned Balthazar of the Three Kings who traveled to Bethlehem to witness the birth of Jesus Christ. Her musical language in the nine-movement cantata combines a neo-Romantic style with the simplicity of negro spirituals.

The album also highlights Bonds’ settings of poetry by Hughes – Winter Moon, and Three Dream Portraits which includes his seminal poem I, Too, Sing America – performed by Merriweather and Jackson in arrangements for baritone and harp. The earliest work on the album is a setting of the poem To a Brown Girl Dead by Countee Cullen, a renowned writer during the Harlem Renaissance of the 1920s.

Margaret Bonds and The Ballad of the Brown King were the focus of Ashley Jackson’s doctoral research and dissertation at The Juilliard School. Reflecting on the recording project, she states, “One of the greatest challenges to learning about Bonds and her music is that the majority of her works remain unpublished. Recordings are even fewer in number. With the new arrangements on this recording, Malcolm Merriweather and I hope to bring her music to new audiences and encourage future performances of pieces that meant a great deal to the composer.” Merriweather continues, “I am delighted that we have been able to bring the music of Margaret Bonds to record – many pieces for the first time. She is one of the great American voices in composition.”

The Dessoff Choirs, hailed as “one of the great amateur choruses of our time” (New York Today) for its “full-bodied sound and suppleness” (The New York Times), and Malcolm J. Merriweather will celebrate the release of The Ballad of the Brown King – and Dessoff’s 95th anniversary season – with a seasonal performance of the work on December 8, 2019, 4:00 pm, at Harlem’s St. Philips Church, joined by the recording’s soloists soprano Laquita Mitchell, mezzo-soprano Lucia Bradford, tenor Noah Stewart, and Bonds authority Dr. Ashley Jackson on harp.

About The Dessoff Choirs
The Dessoff Choirs, one of the leading choruses in New York City, is an independent chorus with an established reputation for pioneering performances of choral works from the Renaissance era through the 21st century. Since its founding in 1924, Dessoff’s mission is to enrich the lives of its audiences and members through the performance of choral music.

Its concerts, professional collaborations, community outreach, and educational initiatives are dedicated to stimulating public interest in and appreciation of choral music as an art form that enhances the culture and life of our times. With repertoire ranging over a wide variety of eras and styles, Dessoff’s musical acumen and flexibility has been recognized with invitations from major orchestras for oratorios and orchestral works.

Past performances include Britten’s War Requiem and Mahler’s Symphony No. 8 with Lorin Maazel in his final performances as Music Director with the New York Philharmonic. Over the course of its 94-year history, Dessoff has presented numerous world premieres, including pieces by Virgil Thomson, George Perle, Paul Moravec, and Ricky Ian Gordon, as well as the first American performance in nearly 100 years of Montemezzi’s opera La Nave with Teatro Grattacielo; and the American premieres of Philip Glass’s Symphony No. 5, and Sir John Tavener’s all-night vigil, The Veil of the Temple. Please visit dessoff.org for more information.

About Malcolm J. Merriweather
Conductor Malcolm J. Merriweather is Music Director of New York City’s The Dessoff Choirs, known for performances of choral works from the pre-Baroque era through the 21st century. An Assistant Professor, he is Director of Choral Studies and Voice Department Coordinator at Brooklyn College of the City University of New York, Artist in Residence at Union Theological Seminary, and Artistic Director of Voices of Haiti, a 60-member children’s choir in Port-au-Prince, Haiti, operated by the Andrea Bocelli Foundation. In the summer of 2017, Merriweather led Voices of Haiti in performances with Andrea Bocelli at Teatro del Silenzio in Lajatico, Italy, and for Pope Francis at the Vatican. Merriweather is also in demand as a baritone soloist, often performing throughout the eastern United States.

Merriweather’s 2019-20 season includes the New York premiere of Craig Hella Johnson’s Considering Matthew Shepard and Fauré’s Requiem, Rutter’s The Sprig of Thyme, and Gregg Smith’s Continental Harmonist, with Dessoff; along with Handel’s Messiah at Brooklyn College and the Harvard Club of New York.

Merriweather’s professional affiliations include membership in Pi Kappa Lambda, the American Choral Directors Association, Chorus America, and he sits on the Board of Directors of the New York Choral Consortium. Please visit malcolmjmerriweather.com for more information. Connect with him on Twitter and Instagram @maestroweather.

As an active concert artist, Ms. Mitchell has sung in the world premiere of Paul Moravec’s Sanctuary Road at Carnegie Hall, Beethoven’s Symphony No. 9 with the Philadelphia Orchestra, and in the world premiere of composer Steven Stucky’s August 4, 1964 with the Dallas Symphony Orchestra. Ms. Mitchell is a Metropolitan Opera National Council Auditions Grand Prize Winner.

Mezzo-soprano Lucia Bradford has performed a number of operatic roles, including Carmen in Bizet’s La Tragedie de Carmen, Zita in Puccini’s Gianni Schicchi, La Principessa in Puccini’s Suor Angelica, The Mother in Ravel’s L’Enfant et les sortileÌges, Mercedes in Bizet’s Carmen, Mrs. Quickly in Verdi’s Falstaff, The Sorceress in Purcell’s Dido and Aeneas, Gertrude in Gounod’s Romeo and Juliet, Hippolyta in Britten’s A Midsummer Night’s Dream, Miss Todd in Menotti’s The Old Maid and the Thief, the Duchess of Plaza-Toro in Gilbert and Sullivan’s The Gondoliers, Azelia Dessalines in William Grant Still’s Troubled Island, and Maria in Gershwin’s Porgy and Bess.

A native of Brooklyn, Ms. Bradford has had the privilege of singing at Carnegie Hall, Merkin Hall, and Philadelphia’s Kimmel Center, as well as touring in Russia, Budapest, Spain, the Caribbean, and throughout the United States.

Tenor Noah Stewart is a frequent guest artist with major opera companies and in concert halls around the world. His musical development started in Harlem, where he studied classical music at The Harlem School of the Arts. When he was 12 years old, his choir teacher encouraged him to pursue a musical career. He began doing voice-overs for Sesame Street and television specials, and won first place in the New England Music Competition in Boston. He went on to study at The Juilliard School in New York.

Praised for her rhythmic precision and dynamic range, harpist Dr. Ashley Jackson enjoys a multifaceted career as a highly sought-after musician and collaborator in New York and beyond. She has appeared on stages in New York and around the world including Avery Fisher Hall, Park Avenue Armory, Royal Opera House in Muscat, Oman, and the National Center for the Performing Arts in Beijing, China.

Throughout her academic and professional careers, she has demonstrated a commitment to diversity and inclusion within higher education and the performing arts. Her speaking engagements have included “Affinities: Margaret Bonds and Langston Hughes” (Studio Museum of Harlem) and “Representation as Resistance: How an Activist Orchestra Redresses the Push-out of Black Practitioners from Classical Music” (Harvard University). As a writer, her works have appeared on NewMusicBox as well as in the International Journal of Women in Music. She holds degrees from Yale University (BA, MM) and The Juilliard School (DMA), where her research on Bonds was the subject of her dissertation, “Margaret Bonds and The Ballad of the Brown King: An Historical Overview and Analysis.”