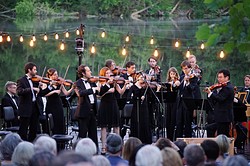 The Sebastians usher in the holiday season with a musical celebration exploring the intersection of German and Italian styles of the Baroque era. At the heart of the program is Johann Sebastian Bach’s cantata Jauchzet Gott in allen Landen (“Shout for Joy to God in Every Land”) featuring guest soloists Dutch-American soprano Katharine Dain and trumpeter Steven Marquardt. Also on the program, which will take place on Wednesday, December 4, 2019, at Good Shepherd-Faith Presbyterian Church on Manhattan’s Upper West Side, are works by German composers Christoph Graupner and Heinrich Schütz, Italians Giuseppe Sammartini and Antonio Vivaldi, and – adding a pan-European dimension to the proceedings – Frenchman Georg Muffat.

An expanded compliment of instrumentalists opens the Sebastians’ program, performing the Concerto Grosso Op. 5, No. 6 by the prolific, Milan-born composer Giuseppe Sammartini whose style had an influence on Christoph Graupner – represented by his Trio Sonata in D major, GWV 204 – and his contemporary J. S. Bach. Neither Bach nor Graupner travelled far from home, but their compatriot Heinrich Schütz studied in Venice. The Italian inspiration that he brought back to Germany infuses his three-part collection of Symphoniae Sacrae (“Sacred Symphonies”). The Sebastians, joined by soprano Katharine Dain, perform “Mein Herz ist bereit” (“My heart is ready”) from the second set. Georg Muffat – a Frenchman who may have been of Scottish descent and travelled throughout Austria, Germany and Italy – rounds out the cosmopolitan program with his Italianate Sonata No. 1 in D major from his collection Armonico tributo, which also incorporates French dance styles. With a hint of optimism, the Sebastians conclude the December program with “Summer” from Antonio Vivaldi’s The Four Seasons.

The Sebastians’ exploration of a variety of European styles and influences continues on February 15, 2020, with the multi-disciplinary program “Words and Music.” Esteemed Japanese-American poet Kimiko Hahn will join the ensemble interspersing readings of her own modern writings with programmatic music from the Baroque era.

For further information about the Sebastians please visit https://www.sebastians.org

ABOUT THE SEBASTIANS
The Sebastians (www.sebastians.org) are a dynamic and vital musical ensemble specializing in music of the baroque and classical eras. Lauded as “everywhere sharp-edged and engaging” (The New York Times), the Sebastians have also been praised for their “well-thought-out articulation and phrasing” (Early Music Review) and “elegant string playing … immaculate in tuning and balance” (Early Music Today).

The Sebastians début recording, Night Scenes from the Ospedale (January 2015), pairs Vivaldi concerti from L’Estro Armonico with newly composed interludes by Robert Honstein. I Care If You Listen praised the “beautifully-nuanced playing and thoughtful expressivity” in the recording, calling the album a “technical and timbral tour-de-force.” The group’s second recording, the Sebastians a 2: Virtuoso Music of the Holy Roman Empire (September 2015), explores the rich baroque repertoire of music for violin and harpsichord written by composers from modern-day Germany, Austria, and the Czech Republic. In the fall of 2018, the Sebastians released a new recording of trio sonatas and vocal works by Corelli, Colista, Handel, and Vivaldi, with soprano Awet Andemicael. Further recordings are currently planned for future seasons.

ABOUT KATHARINE DAIN
Dutch-American soprano Katharine Dain performs opera, chamber music, and oratorio throughout Europe and North America. Highlights of current and recent seasons include Konstanze (Mozart’s Die Entführung aus dem Serail) in the opera houses of Rouen, Avignon, Clermont-Ferrand, Reims, and Massy, Donna Anna (Mozart’s Don Giovanni) in Ecuador, Hungary, and on tour throughout the Netherlands and Belgium with the Orchestra of the 18th Century, and Cunégonde (Bernstein’s Candide) in Banff. On the concert platform, Katharine has recently performed works of Dutilleux and Berlioz with the BBC Scottish Symphony Orchestra under Ryan Bancroft and song cycles of Zemlinsky and Berg under Reinbert de Leeuw in Austria’s Osterfestival; this season she will join longtime collaborators Daniel Reuss and Cappella Amsterdam for the Brahms Requiem as well as the Orchestre d’Auvergne in Mahler’s Fourth Symphony. A musician of unusual intelligence and fearlessness, Katharine is becoming particularly known for her work in 20th- and 21st-century repertoire. In 2020 she will be the featured soloist with the NSO under conductor Manoj Kamps in a touring program of Wagner, Stravinsky, and a newly-commissioned piece written for her by young Dutch composer Rick van Veldhuizen. She has co-founded several chamber groups including Damask Vocal Quartet, whose first album of works by Brahms and contemporaries, O schöne Nacht, garnered universal acclaim in the press and won the French award the Choc de Classica.