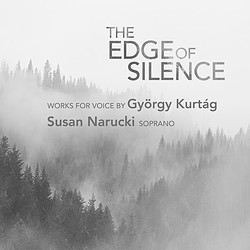 Susan Narucki has been nominated for a Grammy Award in the Best Classical Solo Vocal Album category for her recording The Edge of Silence: Works for Voice by GyoÌrgy KurtaÌg (AVIE Records AV2408).

Susan Narucki is one of today’s most committed advocates of the music of our time. She has a deep and lasting working relationship with Hungarian composer GyoÌrgy KurtaÌg which dates back to 1986. The Edge of Silence is a quintessential recorded collection of some of the composer’s most iconoclastic vocal works. In Susan’s words, “I have spent much of my life immersed in this repertoire, and it has become essential to the way I understand music; it is the heart of my practice as a musician.” Equally appreciative, KurtaÌg acknowledges Susan, “who sang so warmly, purely, so ‘integer’ these songs – with thanks and love.”

The American soprano is no stranger to Grammy Award recognition. She won a Grammy in 2000 as a featured performer in composer George Crumb’s Star-Child, which took the prize for Best Classical Contemporary Composition. She received a nomination in 2002 for Best Classical Vocal Performance, for Elliott Carter's Tempo e Tempi. In 2017, she earned a Latin Grammy Nomination for Cuatro Corridos, a chamber opera she co-created with Mexican novelist Jorge Volpi that addresses the subject of trafficking of women across the U.S.-Mexican border.

Since its release in August 2019, The Edge of Silence has received widespread international acclaim. “Vivid, profound and totally compelling,” was the verdict of The Guardian. MusicWeb International found the recording “treasurable,” and Luxembourg’s Pizzicato admired Narucki’s “wonderful wealth of colors and shades.” AllMusic weighed in, saying The Edge of Silence “may be regarded as definitive.”

This is the second consecutive year that an AVIE release has received a Grammy nomination in the Best Classical Solo Vocal Album category. Last year, tenor Karim Sulayman, conductor Jeannette Sorrell and baroque ensemble Apollo’s Fire took home the award for their recording Songs of Orpheus.