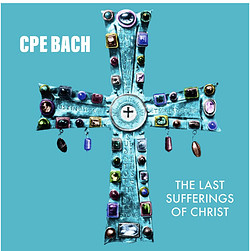 Known during his time for cultivating the classical style of composition, the cosmopolitan son of Johann Sebastian Bach wrote Die letzten Leiden des Erlösers in 1770. It was performed annually in Hamburg until 1785 but is seldom heard today, having since been eclipsed by his father’s more frequently performed St. John and St. Matthew Passions. Die letzten Leiden des Erlösers is by turns contemplative and dramatic. It is one of 21 Passion settings penned by C. P. E. Bach while he was employed as Kappellmeister of the city of Hamburg from 1768 – 1788, the final two decades of his life. Previously associated primarily with keyboard music, during his Hamburg tenure C. P. E. Bach focused more on choral works and cantatas, having to produce a steady stream of music for the services and feast days for the city’s main churches.