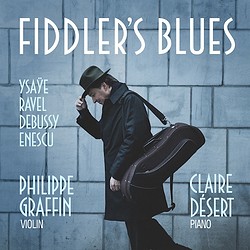 Philippe Graffin will give the UK premiere of the “Sonate posthume” for solo violin by Eugène Ysaÿe on Sunday, 5 April 2020, at Kings Place in London. Graffin discovered the manuscript of Ysaÿe’s unpublished work in the library of the Brussels Conservatoire, an astounding unearthing that extends the Belgian composer’s canon of his essential six sonatas for solo violin. Graffin’s world-premiere recording of the work for AVIE Records, released in 2019, has received widespread international acclaim.

Graffin remarks, “When shown the manuscript, I saw the title “Sixth Sonata” but, to my amazement, I didn’t recognise the music. It wasn’t a sketch but a very elaborate first draft. Two questions puzzled me: firstly, why did YsayÌe abandon it, as he had almost completed its last movement, and secondly, how could this work have remained forgotten for so long. To speculate on the first question, it seems probable that the matter of key was important for YsayÌe, as a note in the sketch book suggests a comparison with J. S. Bach’s sonatas and partitas. Bach ends his cycle with his Third Partita written in the key of E major, and so does YsayÌe in his published Sixth Sonata. I do not know why this work remained hidden for so long, but it is amazing to have discovered it. I finished the piece in the most ‘YsayÌe-esque’ way I could, and I am proud to say that most of what you hear is still really by YsayÌe.”

Graffin’s world-premiere recording of Ysaÿe’s “Sonate posthume”, which opens his album Fiddler’s Blues (AVIE Records AV2399), has received widespread acclaim from the international music media. “Played with flourishing panache and easy command, it makes an electrifying opening” to the album (Gramophone). “It couldn’t have a finer first advocate than Graffin; its first joyful bounds are delivered via a bright, shining tone and captured in clear, direct sound” (The Strad). “A most rewarding release,” according to Pizzicato magazine, which conveyed its Supersonic accolade on the album.

Graffin has made a short film in which he describes his discovery and the provenance of Ysaÿe’s “Sonate posthume”.

Graffin is a mastermind of musical arrangements of well-known works in new guises. Fiddler’s Blues includes Debussy’s Claire de lune, transcribed for solo violin by Graffin together with David Matthews. Graffin’s Kings Place programme includes a version of Ysaÿe’s Fifth Solo Sonata for violin and string quartet, arranged by Mexican-born, UK-based composer Erika Vega and performed with members of the London Chamber Music Society, who also join him in Antonin DvoÅák’s Piano Quartet No. 2 and the “chamber concerto” Concert in D for violin, piano and string quartet by Ernest Chausson.