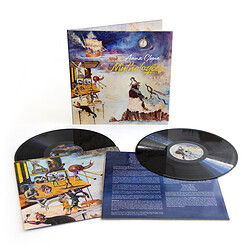 “Mythologies is an excellent survey of her orchestral music, and its embrace of both filmic pizzazz and contemporary edge.” – The Arts Desk

New York, NY (December 2, 2020) – On Friday, February 5, 2021, AVIE Records releases a limited edition vinyl version of composer Anna Clyne's Mythologies, a portrait album of five orchestral works recorded live by the BBC Symphony Orchestra. The album provides insight into a 10 year span of Clyne’s career, tracing the trajectory from her 2005 Manhattan School of Music thesis (<<rewind<<) through works composed during her 2010-2015 residency as Composer-in-Residence at the Chicago Symphony Orchestra.

In Mythologies’ liner notes, da Fonseca-Wollheim writes, “Just as all mythologies draw water from the same well of archetypes, her compositions mine folk traditions in order to construct sound worlds in which the familiar and the surreal come together as in a dream. Clyne’s popular appeal comes from a listener’s dual sense of recognition. Her melodies seem distilled out of collective memory, yet delivered with the high-voltage energy of our overstimulated time.”

Clyne’s Masquerade (2013) was commissioned by BBC Radio 3 to open that year’s Last Night of the Proms at Royal Albert Hall and captures the exuberant spirit of that quintessentially English ritual. Conductor Marin Alsop led the performance on this live, world premiere recording. The title refers to the 18th-century promenade concert, an outdoor festivity that was spiced with acrobats, fireworks and street entertainers. Clyne says, “I am fascinated by the historic and sociological courtship between music and dance. Combined with costumes, masked guises and elaborate settings, masquerades created an exciting, yet controlled, sense of occasion and celebration. It is this that I wish to evoke in Masquerade.”

This Midnight Hour (2015), conducted on this recording in a live performance at The Barbican by the BBC Symphony Orchestra’s Chief Conductor Sakari Oramo, was commissioned by the Orchestre National d’Île de France and Seattle Symphony. It takes its inspiration from two poems – one by Juan Ramón Jiménez, who describes music as a naked woman running mad through the pure night, and Charles Baudelaire’s Harmonie du soir, a sickly-sensuous evocation of evening, in which a trembling violin leads the poet in a waltz that teeters between melancholy and vertigo.

The Seamstress (2014) is one of a number of works Clyne wrote for violin in the wake of personal loss. It was commissioned by the Chicago Symphony Orchestra and pairs an acrobatic violin solo part with a whispered voice that recites William Butler Yeats’ poem A Coat. The imaginary, one-act ballet alludes to folk fiddle traditions and is built on a twelve-tone row, a rare device for Clyne. This recording, conducted by Oramo, features violinist Jennifer Koh performing live at The Barbican alongside the orchestra with a pre-recorded recitation of the poem by vocalist Irene Buckley.

For Night Ferry (2012), Clyne painted a seven-panel mural showing a churned up expanse of water with black-tentacled waves, blood-red eddies and a ship silhouetted before a fiery sky. The Chicago Symphony Orchestra commissioned this work to be performed alongside music by Schubert. Inspired by the violent mood swings Schubert suffered alongside bouts of manic creativity (a condition called cyclothymia), Clyne wrote a piece about stormy voyages in space and of the mind. The title is taken from Seamus Heaney’s Elegy for Robert Lowell, a poet who similarly suffered from manic depression. The performance on this album was led by conductor Andrew Litton at The Barbican.

Speed as an elemental force is the subject of <<rewind<< (2005), a seven-minute wild ride was inspired by the image of a video tape being scrolled backwards, with glitchy spots where it skips, freezes or warps. The original version, for orchestra and tape, was composed in 2005 for choreographer and Artistic Director of Hysterica Dance Company, Kitty McNamee. <<rewind<< was premiered by the Manhattan School of Music Composers Orchestra led by conductor David Gilbert. Conductor André de Ridder led the live performance on this album, recorded at The Barbican.

About Anna Clyne
London-born Anna Clyne is a Grammy-nominated composer of acoustic and electro-acoustic music. Described as a “composer of uncommon gifts and unusual methods” in a New York Times profile and as “dazzlingly inventive” by Time Out New York, Clyne’s work often includes collaborations with cutting-edge choreographers, visual artists, filmmakers, and musicians.

From 2010–2015, Clyne served as a Mead Composer-in-Residence for the Chicago Symphony Orchestra. Music Director Riccardo Muti lauded Clyne as “an artist who writes from the heart, who defies categorization, and who reaches across all barriers and boundaries. Her compositions are meant to be played by great musicians and listened to by enthusiastic audiences no matter what their background.” She has also been in residence with the Baltimore Symphony Orchestra, L’Orchestre national d’Île-de-France, Cabrillo Festival of Contemporary Music, Berkeley Symphony, and National Sawdust. Clyne serves as the mentor composer for the Orchestra of St Luke's DeGaetano Composer Institute. Clyne is currently serving a three-year residency as Associate Composer with the Scottish Chamber Orchestra, through the 2020-2021 season. The residency includes plans for a series of new works commissioned over three years.

Last season saw the premiere of Sound and Fury, premiered by the Scottish Chamber Orchestra and Pekka Kuusisto in Edinburgh; Breathing Statues, a new string quartet for Calidore Quartet, and Shorthand for solo cello and string orchestra, premiered by The Knights at Caramoor in New York. Other recent premieres include her Rumi-inspired cello concerto, DANCE, premiered with Inbal Segev at the 2019 Cabrillo Festival of Contemporary Music, led by Cristian Macelaru; Snake & Ladder, a work for saxophone and electronics premiered by Jess Gillam at the 2019 Cheltenham Music Festival; Beltane with the BBC Scottish Symphony Orchestra and Thomas Dausgaard; Three Sisters, her mandolin concerto for Avi Avital and the Kremerata Baltica; and Restless Oceans with the Taki Concordia Orchestra and Marin Alsop at the Opening Ceremony of the World Economic Forum in Davos. In July 2019, Clyne wrote and arranged music from Nico’s Marble Index for The Nico Project, a theatrical work presented by the Manchester International Festival.

Clyne is the recipient of the 2016 Hindemith Prize; a Charles Ives Fellowship from the American Academy of Arts and Letters; awards from Meet the Composer, the American Music Center, the Foundation for Contemporary Arts, and the Jerome Foundation; and prizes from ASCAP and SEAMUS. She was nominated for the 2014 Times Breakthrough Award (UK).

Clyne’s music is represented on AVIE Records, Cantaloupe Music, Cedille, MajorWho Media, New Amsterdam, Resound, Tzadik, and VIA labels. Recent releases include DANCE/Cello Concerto featuring Inbal Segev, Marin Alsop, and the London Philharmonic; The Violin, an album of her works for multi-tracked violins with animations by artist Josh Dorman; Blue Moth, an album of her instrumental music for ensemble and tape; Night Ferry with the Chicago Symphony Orchestra and Riccardo Muti; and Prince of Clouds featuring Jennifer Koh and Jaime Laredo with the Curtis Chamber Orchestra on Cedille Records. Both Night Ferry and Prince of Clouds were nominated for 2015 Grammy Awards. Clyne's music is published exclusively by Boosey & Hawkes.

About the BBC Symphony Orchestra
The BBC Symphony Orchestra has been at the heart of British musical life since it was founded in 1930. It plays a central role in the BBC Proms, performing around a dozen concerts there each year, including the First and Last Nights.
â¨The BBC SO performs an annual season of concerts at the Barbican, where it is Associate Orchestra. In addition to performances with Chief Conductor Sakari Oramo, Principal Guest Conductor Dalia Stasevska and Creative Artist in Association Jules Buckley, the BBC SO works regularly with Semyon Bychkov, holder of the Günter Wand Conducting Chair and Conductor Laureate Sir Andrew Davis. The BBC SO’s commitment to contemporary music is demonstrated by a range of premieres each season, as well as Total Immersion days devoted to specific composers or themes.
Central to the orchestra’s life are studio recordings for BBC Radio 3, which are free to attend, as well as performances around the world and the vast majority of performances are broadcast on BBC Radio 3 and available for 30 days after broadcast on BBC Sounds.

The BBC Symphony Orchestra and Chorus, alongside the BBC Concert Orchestra, BBC Singers and BBC Proms as part of Get Involved, offer family concerts and enjoyable, adventurous and innovative education work which includes singing workshops, family-friendly introductions to concerts, the BBC Family Orchestra & Chorus and more. There is something for everyone – schools, families, students and amateur musicians of all ages.