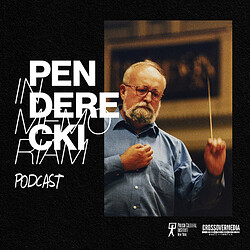 The Penderecki in Memoriam Podcast continues apace, with numerous contributions from leading international conductors now available, including JoAnn Falletta, Kent Nagano and Antoni Wit, and future interviews scheduled with Åukasz Borowicz, Leonard Slatkin and Osmo Vanska, as well as guitarist/pianist/composer Jonny Greenwood of the band Radiohead and violinist Anne-Sophie Mutter. The Penderecki in Memoriam Podcast unveils a multifaceted portrait of Krzysztof Penderecki (1933 – 2020), with commentary from musicians, colleagues, radio programmers, and writers who lend insight and memories of Poland’s greatest modern composer. The Podcast’s episodes are curated and produced by the Polish Cultural Institute New York (PCINY), which is overseeing the months-long project Krzysztof Penderecki in Memoriam, honoring the life and legacy of the composer.

On the Penderecki in Memoriam Podcast, JoAnn Falletta, Music Director of the Buffalo Philharmonic, relates the time she met the composer at his home outside of Kraków and describes his gentle personality. A symbiotic relationship transpired. She invited him to guest-conduct the Buffalo Philharmonic and in 2016 he conducted the orchestra in the premiere performance of his Double Concerto for violin and cello (originally scored for violin and viola). In return, Falletta and the Buffalo Philharmonic appeared at the Warsaw-based Beethoven Easter Festival in 2018, run by the Festival’s General Director Elzbieta Penderecki. Falletta has recorded Krzysztof Penderecki’s Concerto for Horn and Orchestra and Wintereisse.

Kent Nagano’s first encounter with Penderecki was as a student in the 1970s, backstage following a performance of the vast St. Luke Passion, a work infused with the composer’s humanity and integrity, and that pays homage to the music of J. S. Bach. Nearly 50 years later, Nagano conducted the work at the opening of the 2018 Salzburg Festival, leading l'Orchestre symphonique de Montréal, the Warsaw Boys’ Choir, Kraków Philharmonic Choir and vocal soloists, in a performance that was captured live for a critically acclaimed recording released in 2020. Nagano also recalls a visit to Penderecki’s home where in his large garden are planted trees from every country the composer had visited.

Polish conductor Antoni Wit, Music Director of the Warsaw Philharmonic Orchestra from 2002 – 2013, has been a stalwart champion of his compatriot’s music since first meeting the composer in 1963 and going on to study composition with him. Wit conducted the premiere performance of Penderecki’s Polish Requiem which he then recorded in addition to dozens of Penderecki’s works, many of which were supervised by the composer. This episode of the Penderecki in Memoriam Podcast is guest-hosted by Raymond Bisha, Senior Vice President of Naxos of America.

The Penderecki in Memoriam Podcast, hosted and produced by Crossover Media’s Max Horowitz and curated and produced by PCINY’s head of music programming Ania Perzanowska, is available from Apple and Spotify, as well as Amazon Music, Podcast Index, Player FM, Deezer, Gaana, JioSaavn, and Google Podcast and PCINY’s YouTube channel.