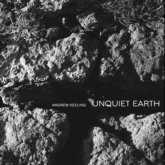 Genre-crossing composer Andrew Keeling will release Unquiet Earth (Spaceward Records SRS 102), an album of his recent chamber works, on 11 June 2012. The works represent a coming together of Andrew’s varied influences, including classical training as a cathedral chorister, a stint in academia, and a decades-long fascination with the spontaneity, rhythm and energy of progressive rock which, combined with the formality of classical music, results in a personal idiom and musical language that is at once lyrical and dramatic, and defined by Andrew’s intuition and emotional candour.

The four-movement string quartet Present is a substantial work which shares the grandeur of the great chamber works of Beethoven and Schubert, but does not directly mimic their style. The music was inspired by Alison Prince’s poem All This Time. The quartet has a questioning, restless quality, but also a sense that divine presence is close by, even if often revealed in unlikely ways.

The atmospheric Beacon Hill recalls a walk made by the composer to the summit of the wooded hill which rises above the Lake District town of Penrith. The music unfolds like a slow, funereal Sarabande over a ground-bass, but gradually rises to an ecstatic climax. At this point, the melancholy mood abruptly returns.

Perhaps the most unusual and innovative work on the disc is You Cut the String written for Steve Bingham’s unique five-string electric violin and sound-loops. Commissioned by and dedicated to Bingham, the music is made up from eight multi-tracked sound-loops which are, one by one, hypnotically superimposed to create what the composer calls “a gradually accumulating rhythmic mobile.”

Unqiet Earth is scored for piano, violin and cello and is a musical response to the last paragraph of Emily Brontë’s novel Wuthering Heights. The work has two almost improvisatory movements. A fragmentary slow introduction leads to a quicker, boisterous section as the movement unwinds into tender introspection. The second movement injects new rhythmic energy in the form of a restless, awkward jig, until a slow, serene lament emerges, which dissolves into deep meditation.

Keeling’s works have been performed and broadcast throughout the world by such musicians as Dame Evelyn Glennie, the BBC Philharmonic Orchestra, Fretwork, guitarist Craig Ogdon, and lutenist Jacob Heringman, among others. His music has been released on the DGM, Burning Shed, Metier, Riverrun, UHR and Spaceward labels. An avid songwriter and improviser, Keeling has written, collaborated and released albums with musicians including David Cross (King Crimson), Stephen Fellows (Comsat Angels) and Tim Bowness (No-Man). Andrew has a particular interest in the music of King Crimson and has written three Musical Guides to the prog-rock band’s music as well as orchestrating the music of lead guitarist / frontman Robert Fripp. An album of these orchestrations, The Wine of Silence, performed by the Metropole Orchestra of Amsterdam, was released on DGM Records in April 2012 and reached number 11 on the UK Specialist Classical Chart. Andrew has also been a lecturer at the University of Liverpool and the Royal Northern College of Music

“Unquiet Earth is truly magnificent. Andrew Keeling has worked his way through this long period of hammering out ideas as if through a steel foundry, and emerged with something truly finished and perfect … This should establish Andrew Keeling without question as a leading figure in the classical music of our time.” (Alison Prince)