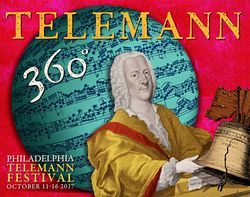 “Hello. My name is Georg Philipp Telemann and I am a gardener, poet, printer, publisher, traveler and I write music.” If the most-admired composer of his time were addressing an audience of his contemporaries, that may well have been how he introduced himself.

Fast forward to the 21st century and bring on Telemann 360°, a five-day multidisciplinary festival taking place in October 2017, curated by Philadelphia Baroque Orchestra Tempesta di Mare to celebrate all things Telemann – his music, of course, but also all facets of the man with an insatiable curiosity about brewing, finance, gardening, literature, printing, publishing and more, all of which imbued his vast and varied compositional output. Telemann 360° encompasses two all-Telemann concerts which include modern day premieres, a live talk show, an international symposium, pop-up events, broadcasts and recordings. Bringing to light some surprising Philadelphia connections with references to rivers, gardens, printing presses and pubs, Tempesta di Mare is collaborating with other leading fellow-Philadelphia institutions to explore the life and times of the 18th century innovator.

Major support for Telemann 360º has been provided by The Pew Center for Arts and Heritage, with additional support by awards from The Presser Foundation and National Endowment for the Arts.

Born in Magdeburg, Germany, Georg Philipp Telemann (1681 – 1767) was revered throughout Europe during his lifetime. Fellow-composers Johann Sebastian Bach and George Frideric Handel were admiring friends. Hamburg-based music theorist Johann Mattheson proclaimed, “Lully fame has won, Corelli may be praised, but Telemann alone above all praise is raised.” Telemann was idolized in copious European capitals. He was offered – and turned down – such prestigious appointments as Kantor of Leipzig’s Thomaskirche, a post that was eventually given to J. S. Bach. He prodigiously self-published and practically invented the subscription model. A self-made man, he had a thriving career.

But baroque music fell out of fashion in the late 18th century and Telemann’s star waned. The composer’s fading from public consciousness may have been compounded by human fickleness, fandom and the capriciousness of celebrity. Bach and Handel have long since enjoyed their renaissance, and for many of today’s international Baroque music specialists, particularly in Europe, Telemann has resumed his reputation at the top of the musical food chain, but it remains more elusive in America. With Telemann 360°, Tempesta di Mare will challenge this prejudice musically and otherwise, demonstrating the composer’s “incredible variety of character and nuance, melody and invention,” comments Tempesta co-director Gwyn Roberts, continuing, “I think as Telemann becomes better known and played with the kind of attention he deserves, he’s going to become a really distinctive voice in our culture. And he’s going to continue surprising us.”

LIVE TALK SHOW
Telemann 360° gets underway on October 11, 2017, with The Case for Telemann, a live public talk show exploring Telemann’s music and reputation. Moderated by Fred Child, host of American Public Media’s Performance Today and PBS’ Live from Lincoln Center, The Case for Telemann provides opportunities to consider issues of criticism, fame, and reputation. Panel members include psychologist Lynn Zubernis and art historian John Nici, both of whom have written on the vagaries of fame and the psychology of fandom; scholar Wolfgang Hirschmann from Germany’s International Telemann Research Center; musicologist Steven Zohn of Temple University and Tempesta’s Gwyn Roberts. Live musical excerpts, performed by Tempesta di Mare, will illustrate the conversation. The Case for Telemann will be recorded for subsequent broadcast on Performance Today, syndicated by nearly 300 stations throughout the U.S.

PERFORMANCES
At the heart of Telemann 360° are two Tempesta di Mare concerts, one chamber and one orchestral, that together span the composer’s entire compositional career and offer a variety of musical styles and genres. On October 13, 2017, The Faithful Music Master surveys a selection of instrumental quartets and trio sonatas paired with the modern premiere of the cantata Ei nun, mein lieber Jesu, a work with Philadelphia and Telemann-in-his-lifetime connections: the score arrived via the Port of Philadelphia and was performed in nearby Lancaster’s Trinity Lutheran Church in 1766. On October 14, 2017, Fire & Invention will convene Tempesta’s largest ensemble to date, a 32-piece orchestra emulating the renowned baroque-era Dresden Hofkapelle. The program includes two rarely performed concertos-en-suite, which “represent one of Telemann’s most important and influential contributions to the German mixed-style” (Steven Zohn: Music for a Mixed Taste), and notable for their colorful and vivid orchestrations. The concert also includes the modern premieres of six Entr’actes recently identified by Steven Zohn as Telemann’s, from the personal collection of Dresden Hofkapelle concertmaster Johann Georg Pisendel, a long-time friend of Telemann. Tempesta di Mare is creating the first modern performing edition of this work. Full program listings are below.

INTERNATIONAL TELEMANN CONFERENCE
Concurrent with Telemann 360°, Temple University’s Boyer College of Music and Art and professor Steven Zohn will host “Enlightenment and Postmodern Perspectives,” the first international conference devoted to Telemann to be held on U.S. soil. Taking its cue from the annual International Telemann Conference in the composer’s hometown of Magdeburg, Germany, the symposium will assemble dozens of leading international academics, aficionados, media and musicians from Europe, the U.S. and as far afield as Japan.

RECORDING
Following Telemann 360°, from October 16-18, 2017, Tempesta di Mare will take Telemann’s three concertos-en-suite into the recording studio for an album to be released on the leading independent classical label Chandos Records. This will be the first ever recording of all of Telemann’s surviving works in this unusual form. The recording will be released worldwide in Summer 2018.

TOURS AND POP-UP EVENTS
History lives in Philadelphia, a city that boasts an abundance of 18th-century architecture, artifacts and estates. Tempesta di Mare has joined with numerous fellow-Philadelphia institutions to organize events, tours and displays with distinct links to Telemann 360° and the life and times of the composer. These include:

- Flower shows in fine botanical gardens, including Bartram’s Garden, Powel House, and Hill-Physick House, all featuring flowers and plantings known to have been cultivated by Telemann, an enthusiastic gardener

- Tours of the Independence Seaport Museum (where the talk show The Case for Telemann will take place), which houses the Telemann-era replica ship the Diligence, and where an exhibit will present how art, culture and goods have arrived in the U.S. over the centuries

- A display of Dresden china at the Philadelphia Museum of Art

- Display at Penn University’s Kislak Center of the prestigious Jonathan Swift collection and other 18th-century manuscripts that shed light on both the home-grown musical life in Philadelphia at that time, as well as the importation of music and culture from Europe. So taken was Telemann with Swift’s Gulliver’s Travels, he composed an engaging, programmatic suite of the same name for two violins

The complete Telemann 360° schedule of events, background information and a self-guided walking tour of all Telemann-related sites and pop-up locations will be accessible via a specially created interactive Telemann Internet portal in early September.

A SEASON OF TELEMANN
While Telemann 360° offers a condensed and comprehensive focus on the composer, his music infuses Tempesta di Mare’s entire 2017-18 season. The chamber program The Faithful Music Master will first be performed on September 23, 2017 at the Presbyterian Church of Chestnut Hill and on September 24, 2017 at Trinity Lutheran Church in Lancaster, Pennsylvania. Concerts on January 26 and 27, 2018, at the American Philosophical Society and Presbyterian Church of Chestnut Hill, will include the orchestral suite La Burlesque. Tempesta’s season will close on May 19 and 20, 2018, with concerts at the Independence Seaport Museum and Presbyterian Church of Chestnut Hill. The program features a “river” theme and will include Telemann’s “Hamburger Ebb’ und Fluth,” a work written for another great river city and Telemann’s home, Hamburg.

TEMPESTA DI MARE PHILADELPHIA BAROQUE ORCHESTRA & CHAMBER PLAYERS
Fanfare magazine has hailed Tempesta di Mare for its "abundant energy, immaculate ensemble, impeccable intonation, and an undeniable sense of purpose." Led by directors Gwyn Roberts and Richard Stone with concertmaster Emlyn Ngai, Tempesta performs baroque music on baroque instruments with a repertoire that ranges from staged opera to chamber music. The group performs all orchestral repertoire without a conductor, as was the practice when this music was new. Tempesta's Philadelphia Concert Series, noted by the Philadelphia Inquirer for its "off-the-grid chic factor," emphasizes creating a sense of discovery for artists and audiences alike. Launched in 2002, the series has included 31 modern world premieres of lost or forgotten baroque masterpieces, leading the Inquirer to describe Tempesta as "an old-music group that acts like a new-music group, by pushing the cutting edge back rather than forward." Its supporters include the Pew Charitable Trusts, the William Penn Foundation, the Presser Foundation and the National Endowment for the Arts. â¨ â¨In a marketplace dominated by European ensembles, Tempesta is the only American baroque music group to record for the prestigious British-based Chandos label. Releases include Weiss: Lute Concerti (2004), Handel: Flaming Rose (2007), Scarlatti: Cantatas and Chamber Music (2010), Fasch: Orchestral Music, vol.1 (2008), vol.2 (2011) and vol.3 (2012), Mancini: Solos for a Flute (2014), Bach Trio Sonatas (2014), and Comédie & Tragédie, vol. 1 (2015). Comédie & Tragédie, vol. 2 was released in February 2016. Live performances have been broadcast nationally on SymphonyCast, Performance Today, Sunday Baroque and Harmonia. Tempesta di Mare's concert recordings are distributed worldwide via the European Broadcasting Union, the world's foremost alliance of public service media organizations, with members in 56 countries in Europe and beyond.