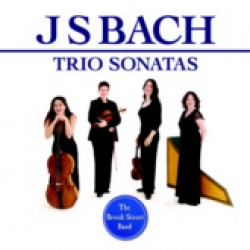 The Brook Street Band burst on to the scene in 2003 with their Avie debut, the world-premiere recording of Handel's 'Oxford' Water Music, a genuine chamber arrangement of the composer's ever-popular suite which earned the period-instrument ensemble an Editor's Choice from Gramophone. Since then the all-girl group, named for the London street where Handel lived and composed for most of his working life in England, has released three further Handel surveys which prove their own adept skills at arranging. They now apply the age-old practice to their first recording of the music of J S Bach, adapting his Organ Sonatas to their own instrumentation of two violins, harpsichord and cello. The result is yet another unique approach from the Brook Street Band, whose sheer pleasure in sharing this wonderful music shines though in their radiant renditions.