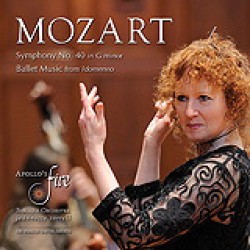 Mozart Symphony No. 40, Ballet Music from Idomeneo / Apollo's Fire
Avie Records
Mozart Symphony No. 40, Ballet Music from Idomeneo
Label: AVIE
Catalog Num: AV 2159
Tweet
Apollo's Fire, the Cleveland Baroque Orchestra founded in 1992 by award-winning harpsichordist and conductor Jeannette Sorrell, launches a major new association with Avie with two releases that exemplify "the intense detailing Sorrell and company bring to music from the Baroque and Classical eras." (The Cleveland Plain Dealer). These vibrant performances of varied works by J.S. Bach and Mozart feature popular repertoire brought together in pairings that have not appeared on disc before.

The all-Mozart recording leads with the composer's darkest Symphony, No. 40 in G minor. American soprano Amanda Forsythe joins the group in a dramatic recitative and virtuoso aria from Lucio Silla. Also included is the Ballet Music from Idomeneo, a festive and rarely-heard suite from the last great work in the opera seria tradition. Rounding out the disc are four lively and entertaining Contradances.

The 2-CD Bach set takes the ever-popular Brandenburg Concertos, and uniquely couples them with two Harpsichord Concertos, one of which is also presented in a reconstruction for violin.

Taking its name from the classical god of music and the sun, Apollo's Fire is dedicated to the performance of 17th- and 18th-century music on period instruments. Founder and Music Director Jeannette Sorrell and her ensemble of dynamic and creative early-music artists from North America and Europe have been praised internationally for stylistic freshness and buoyancy, animated spontaneity, technical excellence, and creative programming. An award-winning harpsichordist and conductor, Sorrell studied with Gustav Leonhardt in Amsterdam and Leonard Bernstein at Tanglewood. Praised for its "temperament and personality" by The New York Times, the ensemble has toured throughout North America and, in November 2010 embarks on its first tour of Europe.