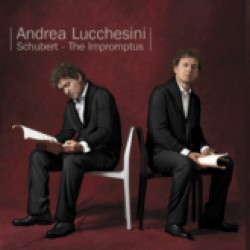 The brilliant career of Italian pianist Andrea Lucchesini was launched in 1983, when he became the first Italian ever to win the Dino Ciani International Competition at La Scala in Milan. He has since made numerous award-winning recordings and performed all over the world with such orchestras as the Berlin Philharmonic, Royal Concertgebouw, Houston Symphony, London Philharmonic, under the baton of such conductors as Claudio Abbado, Semyon Bychkov and Riccardo Chailly.

A probing musician, Lucchesini is well-known for his advocacy of contemporary music - his first recording for Avie featured the complete solo piano works by Berio (AV 2104) - yet he is equally at home with the Romantic masters as this, his first recording of Schubert, demonstrates.
Related Links
Content Copyright © MusicCoInternational, All Rights Reserved | Powered by KultureShock.Net