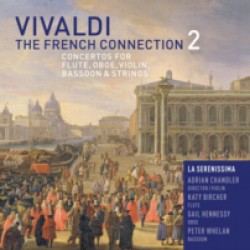 Il Gran Mogol was released as an exclusive three-track digital EP on March 1, three days before Vivaldi's 333rd birthday, paving the way for this full album release, which comes with a digital booklet.

Mainstream international media focused their attention on the unearthing of Il Gran Mogol and did so again in February when the work was released first as a digital download. This premiere recording, by today's leading exponents of the music of Vivaldi, did not disappoint and resulted in headline features in Gramophone, BBC Music Magazine, Classic FM, KDFC (US broadcast premiere) and numerous other international media.

In addition to its award-winning achievement, the original Vivaldi: The French Connection was a best-seller in 2010, reaching Number 3 on the Billboard Classical Chart.