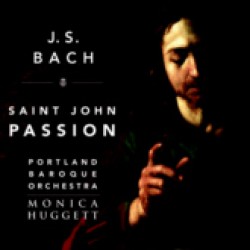 Monica Huggett has produced numerous best-selling and acclaimed recordings for Avie, notably the Grammy®-nominated Bach Orchestral Suites (AV 2171) which made the Top 10 of Billboard's Traditional Classical Chart. This ear-opening version which - Monica claims - restored Suite No. 2 to its original instrumentation, placing the solo line with oboe rather than the more commonly-heard flute. She makes a similar case with her new recording of Bach's St. John Passion, placing oboes where we typically hear flutes, arguing convincingly that Bach's original score was produced during his early years working in Leipzig where flutes were unavailable to him.

Once again, Monica is aided and abetted by baroque oboist Gonzalo X. Ruiz, who states, "The omission of flutes gives the St. John Passion a less galante feel for Bach's music that developed in the mid-18th century and restores a trim sound, in line with most orchestral music of the time. It retains, however, an undeniable richness of orchestration owing to the uncommon string instruments in the arias."

Monica continues, "There have been many scholarly discussions about the forces originally used for the St. John Passion, including the suggestion of performing it with one voice or instrument to a part. The most satisfying performances in my personal experience have been those involving a small chorus matched with a small orchestra. I have chosen, therefore, to have about an equal number of instrumentalists alongside a group of twelve singers capable of both solo and consort singing, as Bach would have had in Leipzig."

Monica leads the Portland Baroque Orchestra, the fourth-largest period-instrument ensemble in the US, where she has been Artistic Director since 1995. Joining the orchestra is Portland-based choir Cappella Romana and baroque specialist, English tenor Charles Daniels as the Evangelist.

Full sung texts in the original German with English translations are included in the CD package.