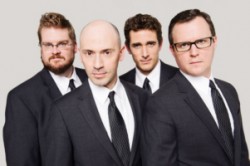 New York Polyphony is establishing a reputation as one of the world's finest vocal chamber ensembles. Praised for a "rich, natural sound that's larger and more complex than the sum of its parts" (National Public Radio) the four men deliver dynamic performances in a wide range of styles. The quartet applies not only refined musicianship and interpretive detail but also a uniquely modern sensibility to its varied repertoire, which ranges from austere medieval melodies to cutting-edge contemporary works.