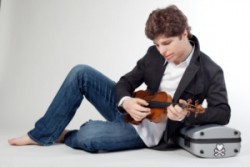 With his poetic style and dazzling technique, Augustin Hadelich has established himself as a rising star among the new generation of violinists. Winner of the 2009 Avery Fisher Career Grant and gold medallist of the 2006 International Violin Competition of Indianapolis, his versatility across the entire spectrum of the violin repertory is astounding.