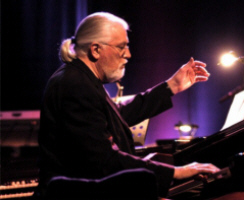 Classically trained from the age of 7, composer and keyboard player Jon Lord was diverted for over 40 years with his involvement in rock band Deep Purple during which time he penned such perennials as Smoke on the Water and Child in Time. He returned to full-time classical composing in 2002 and five years later achieved great acclaim and sales success for his Durham Concerto.

Jon's work, To Notice Such Things, was released by Avie Records in 2010, to critical acclaim and commercial success. A heartfelt dedication to the late Sir John Mortimer, the recording topped the UK classical charts and earned an Editor's Choice from Gramophone Magazine.

MusicCo handled international media for Jon Lord surrounding the release of To Notice Such Things. We mourned his untimely passing on July 16, 2012, but are grateful that his spirit lives on through his beautiful music.