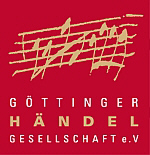 Founded in 1919, the International Handel Festival in Göttingen, Germany, is the world's oldest festival for baroque music. The Festival spurred the revival and cultivation of Handel's operas and other compositions in the 20th century.