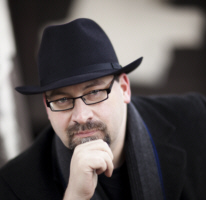 Kenneth Woods
Benjamin Ealovega
Hailed by the Washington Post as a "true star" of the podium, conductor, author and cellist Kenneth Woods has worked with many orchestras of international distinction including the National Symphony Orchestra, Cincinnati Symphony, BBC National Orchestra of Wales, Northern Sinfonia, Budapest Festival Orchestra and the State of Mexico Symphony Orchestra. He has also appeared on the stages of some of the world's leading music festivals, including Aspen, Lucerne, Round Top and Scotia. His work on the concert platform and in the recording studio has led to numerous broadcasts on BBC Radio 3, National Public Radio, and the Canadian Broadcasting Corporation.

In 2010, Kenneth Woods was appointed Principal Guest Conductor of Orchestra of the Swan, with whom he made his debut in the final concert of their Spring Sounds Festival. In December 2010, Kenneth recorded the first disc in a series pairing the complete symphonies of Robert Schumann and Austrian émigré composer Hans Gál. This world-premiere recording pf the Gál coincided with the first performance in 55 years of the Third Symphony. Kenneth Woods made his commercial recording debut as a conductor in sessions for Avie Records with the Northern Sinfonia. The disc of world-premiere recordings of music by Hans Gál has been hailed by The Strad, Classical Music, Classical CD Reviews and Musical Pointers for its "committed performances", "first class" and "quick witted" playing, whilst Gramophone underlined Woods' "highly polished account, with orchestral playing throughout most assured."

As music director of the Oregon East Symphony from 2000-9, Woods transformed a tiny orchestra in a remote, rural area into possibly the most talked-about orchestra in the Pacific Northwest, winning universal praise for their nationally celebrated "Redneck Mahler" cycle, progressive programming and innovative youth programs. Other permanent affiliations include the Contemporary Music Ensemble of Wales (with whom he is often heard on BBC Radio 3), and the Rose City Chamber Orchestra of Portland, Oregon. In June 2010, he was invited by the Stradivari Trust to conduct their 25th anniversary concert, featuring a string orchestra made up of many of the world's leading soloists and chamber musicians including Natalie Clein, Lawrence Power, Guy Johnston, Matthew Trussler and the Endellion and Fitzwilliam String Quartets. Kenneth's blog, A View from the Podium, is one of the 25 most popular classical music blogs in the world.